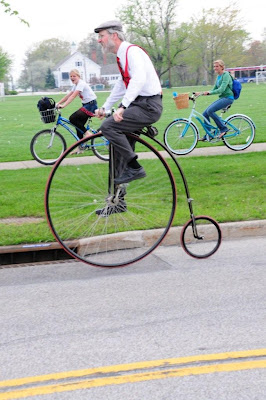 Doesn't every guy on a penny-farthing?! Dick DeLombard, a longtime friend of Century Cycles and the bicycling community, brought his high-wheeler and his enthusiastic support for Bay Village Bike To School Challenge on the very first day of the challenge on May 4. He pedaled between Bay Middle School and Bay High School, riding along with the 960 students who biked to school that morning.

We've got to give our hearty thanks to Dick, for getting up so early to join us and for adding a festive air of bicycling nostalgia that the kids, staff, and even car commuters on Wolf Road all found thrilling.

COOL FACT: Longest ride Dick has taken on that bike? 101 miles! That's right -- he's done a century on it. Remember that the next time you young'uns brag about riding distances on fixies.
Posted by Tracey at 3:24 PM