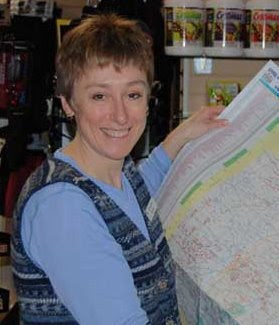 Krista McNamee is trying to get out the door to do a long bike ride in the Ohio countryside with friends. It’s her day off from working the sales floor at the Century Cycles in Rocky River and she’s got plans. However, we were able to keep her on the phone long enough to ask the Cleveland resident (and wife of a city police detective) a few questions before she loads up her bike and heads out.
Q. Where are you riding today?
A. My friends and I haven’t decided. We have a rule that we have to ride longer than the time it takes to drive there, so we’ll ride about 60 miles, probably somewhere south of Spencer. In July, we’re headed to New York to bicycle along the St. Lawrence Seaway and then around Gaspe Peninsula for three weeks. We’re riding the Route Verte, a bicycle trail network in Quebec. We’ll be doing a lot of high mileage days early in the trip, to get through Montreal and Quebec City and out of civilization.
Q. How many bikes do you have and which is your favorite?
A. I have four bikes. Asking me which is my favorite is like asking “who is your favorite child?” They are all different with their own purpose. The newest is a Surly Cross Check. It’s my trails and dirt-road bike for self-contained rides. I haven’t decided if I’m taking the Surly or my Waterford on the Quebec trip. The Waterford is a custom adventure bike designed to be fully loaded for touring.
Q. What’s your favorite trail or ride? (She asks for geographical specificity, so we tell her within 75 miles of Cleveland.)
A. A covered bridge loop in Ashtabula that I do based on a map I found from way back. It’s so unique and scenic and beautiful. The roads are light traffic and there are plenty of wineries in case you want to stop for lunch.
Q. What is your biggest accomplishment on a bike?
A. I did the Coast-to-Coast ride in 2003 and rode 4,400 miles in nine weeks. Of course it was a supported ride; you can’t cover those distances without support unless you’re Ray. We went over the Continental Divide several times and did a lot of climbing. Probably the biggest accomplishment of that ride was Teton Pass. Anyone who’s biked it knows exactly what I mean.
Q. What do you like to do when you’re not on a bike or working at Century Cycles?
A. I’m trying to learn French, for the trip to Quebec.
Q. What are three words that describe how you feel on a bike?
A. Refreshed. Carefree. Energized.
Q. On most days you commute to the store by bike. Which bike do you ride for that?
A. My Bianchi Castro Valley commuter bike. It has straight handlebars, a generator headlight, and a rack to carry stuff.
Q. What was your first bike?
A. A blue and white bike from the hardware store. My dad wouldn’t step a foot into a bike store in the mid 1970s. I’ve always been into bicycling because I grew up in rural Olmsted Township. I had to get on a bike to get anywhere, especially with a mom who didn’t drive and a dad who worked oddball hours.
Q. Road or dirt?
A. Both. I spend a lot of time on dirt roads in rural Ohio.
Q. What was the best advice you were given?
A. Go at your own pace. Stay hydrated.
Q. What question do you ask customers most often?
A. "Where do you see yourself riding the bike you want to buy?" I ask a lot of questions on where and how they want to ride, to find the best bike to fit the application they are going to do the most. When people come in and ask to see a road bike, for example, I ask more questions to find out what they really mean by "road bike."
Posted by Kevin at 6:38 PM