ALERT! Our Extended Summer Sunday Hours return to the Century Cycles stores in Peninsula and Rocky River this weekend!

Beginning on Sunday, June 2, 2019 and until further notice:


As always, you can find our current hours of operation for all three stores at: centurycycles.com/for/hours


Posted by Century Cycles at 6:00 AM No comments: 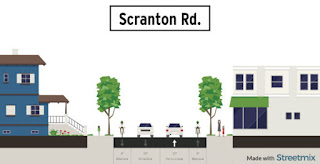 This message is from Bike Cleveland:

A recent NewsChannel 5 report brought forward some Scranton Road resident’s safety concerns about the bike lanes that are planned as part of the resurfacing of the road. The reporter stated that this would be a “bike lane on a road that many use to get to downtown Cleveland” and that it is “packed with 3 schools, several churches, an RTA bus route, and MetroHealth Medical Center traffic.”

It was also suggested that the bike lanes will create a “significant safety risk” and that the “bike lanes just won’t fit.”

While we respect the concerns expressed by some residents, the bike lanes will enhance the safety of Scranton Road and we’d like to take a moment to clarify why we need bike lanes on Scranton Rd:

Putting a “bike lane on a road that many use to get to downtown Cleveland” makes sense. Bicycle riders in this neighborhood (and those that travel through it) use Scranton Road to get to Downtown Cleveland as well. To the west is the notoriously dangerous 25th Street, and to the east is Interstate 71 – with only a few ways to connect (out of the way) to 14th Street. This is why Scranton Road has been on the city’s Bikeway Implementation Plan since 2014.

Putting a bike lane on a road that is “packed with 3 schools, several churches, an RTA bus route, and MetroHealth Medical Center traffic” also makes sense. Children riding to school, to the library, and beyond need to be safe. Riders of all ages and abilities need to move through the neighborhood safely. Scranton Road has long been designated as a Safe Routes to School corridor – both for Scranton and Luis Munoz Marin Schools.

There is nothing to substantiate that the bike lanes will create a “significant safety risk” and they will certainly fit.

CALL TO ACTION: If you demand a connected bike network as planned over the past 5 years through the City of Cleveland Bikeway Implementation Plan, we ask you to contact Councilwoman Jasmin Santana and her assistant via the details below. Express your desire for bike lanes on Scranton Road, and emphasize that they will enhance the safety of the corridor for all road users.

Her assistant is:  Maranyeliz Miranda: mmiranda@clevelandcitycouncil.org
Posted by Century Cycles at 10:49 AM No comments: 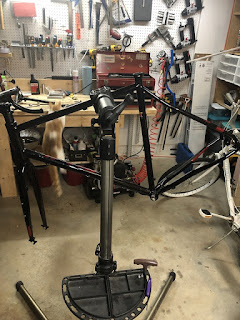 The public is invited to this FREE series of three bike maintenance workshops at the Wadsworth Public Library. Sponsored by Wadsworth Exploration Guild, and led by an experienced bike technician from Century Cycles in Medina.  Bring your bike if you'd like and you'll be able to see how the skills taught apply to your own bike as the workshop are held. Pre-registration is required.

Bike Workshop #1 - Know Your Bike
This workshop will cover the types of bikes and bike parts, and also go over how to change a flat tire.
Wednesday, June 5, 2019, 7:00-9:00pm
Register Here
Get the latest news and updates on Facebook

Bike Workshop #2 - Cleaning and Lubing your Bike
This workshop will cover how to clean and lube your bike so that it not only looks good, but rides smoothly.
Wednesday, July 10, 2019, 7:00-9:00pm
Register Here
Get the latest news and updates on Facebook

Bike Workshop #3 - Basic Derailleur and Brake Adjustment
This workshop will cover the basics of how to adjust your derailleurs and brakes for smooth and reliable gear shifting and braking.
Wednesday, August 7, 2019, 7:00-9:00pm
Register Here
Get the latest news and updates on Facebook

Posted by Century Cycles at 12:47 PM No comments:

Memorial Weekend: LAST CHANCE to SAVE 20% on select car racks and indoor trainers!

You have until Monday, May 27, 2019 to take advantage of 20% OFF savings on the following products listed below at Century Cycles!

Please note that our Medina and Rocky River stores will be CLOSED on Monday, May 27 for the Memorial Day holiday, but our Peninsula store will be OPEN from 10:00am until 5:00pm! 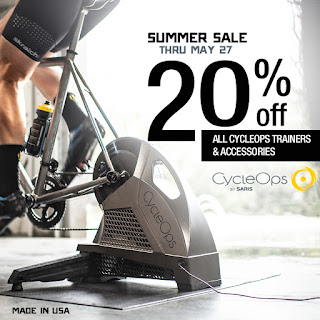 20% OFF all CycleOps indoor trainers and accessories! In-stock AND special-orders! 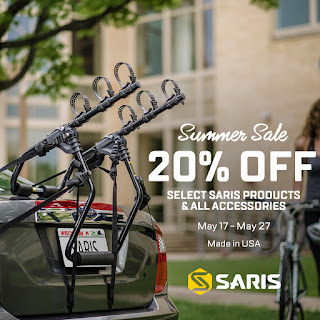 20% OFF all Saris car rack accessories (in-stock AND special-order) and 20% OFF these car racks (available by special-order only): 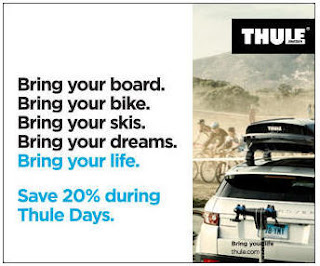 20% OFF all Thule car racks and accessories!
Posted by Century Cycles at 11:16 AM No comments: 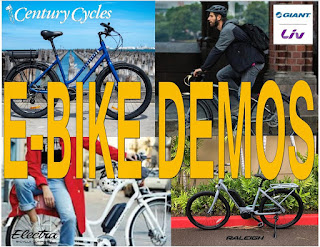 Electric bicycles, or e-bikes, have become one of the fastest-growing categories in the bike industry over the last few years.  Join Century Cycles in Medina for the opportunity to test-ride one of these fun and exciting pedal-assist bicycles!

Patti Grauel, Century Cycles' buyer and local Liv Cycling Brand Ambassador, will be hosting our first eBike Demo Days once a month for the next three months!

So, stop up to our store and look for the Century Cycles tent in the parking lot! Then, demo our fleet and see what the excitement is all about!

(Of course, you can test ride our eBikes anytime at our Medina and Rocky River store locations!)
Posted by Century Cycles at 6:00 AM No comments:

Here are the special hours of operation for Century Cycles during the 2019 Memorial Day holiday weekend:

All three stores will be open for our regular hours on all other days.
Posted by Century Cycles at 6:00 AM No comments:

From May 17 through July 7, 2019, Salsa Cycles is running a sale on Timberjack Deore and SLX models as well as Journeyman Flat Bar models. This is a great chance to take home a new Salsa and take on new riding experiences!

Timberjack
Need a fun trail hardtail mountain bike that can do it all? Timberjack comes with 29” or 27.5+ wheels and offers 130mm of front travel, a dropper post, and modern geometry for confidence on the trail.


Journeyman Flat Bar
Looking for a new adventure bike? Journeyman Flat Bar comes with 700C or 650B wheels and mounts for racks, fenders, and other accessories so you can choose your journey. Available by special-order. 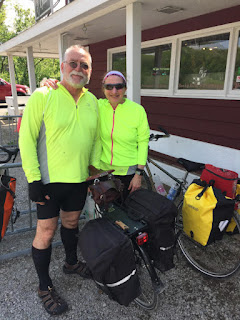 Steve and Eileen live in Cleveland. On Saturday, May 18, 2019, they stopped into the Century Cycles store in Peninsula during the first day of their bicycle touring trip on the Ohio to Erie Trail. After we helped them fix some flat tire issues, they continued on their way to Cincinnati, where they'll be visiting with their grandchildren. They'll use the Ohio Trail Shuttle service to get back to Cleveland.

You can see more photos of bicycle touring visitors that have been in all three of our stores in our Bicycle Touring Photo Gallery.
Posted by Century Cycles at 2:03 PM No comments:

Experience what thousands of riders are talking about...the extraordinary ride of the all-new Jamis Hardline® and Jamis Portal® 3VO Suspension mountain bikes. For those interested in getting your drop-bar gravel fix, we'll also have new Renegades available to demo.

This is a free event. No tickets or advance registration is required.

Follow the event on Facebook for the latest news and updates.
Posted by Century Cycles at 2:31 PM No comments: 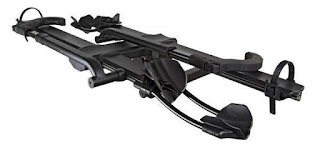 To complement the already extensive selection of bike racks for your car that we have in stock at Century Cycles, we are now a dealer for Kuat Racks!

In stock, we have the Kuat NV Base 2.0, which features fully integrated cable locks and hitch lock included, front tire ratchet with an intuitive release, rear tire strap with a co-molded strap to protect wheels, and no-tool installation with hand tight hitch cam system. It holds two bicycles up to 60 pounds each! Each bike can have a wheelbase up to 48 inches, and tires up to 4.8 inches wide with the optional Phat Bike Kit!

Also in stock is the Kuat Sherpa 2.0 that resets the standard for user-friendly adventure. Folding tire cradles create an abundance of clearance, while Kuat's foot-actuated pivot lever lets you bask in the glory of carrying a bike or eating a breakfast burrito while unfolding your rack at the same time. With features designed around your lifestyle, this lightweight rack is as easy to take off as it is to leave on. Holds two bikes up to 40 pounds each, 47-inch maximum wheelbase and 3-inch maximum tire width.

Posted by Century Cycles at 12:37 PM No comments:

Celebrate the launch of the Great American Rail Trail! 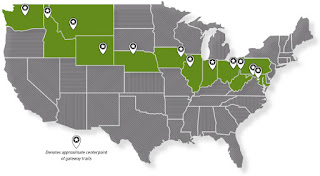 On Wednesday, May 18, the Rails-to-Trails Conservancy and their partners are celebrating the Great American Rail-Trail with a reveal of the trail’s preferred cross-country route. Trail-side events will be taking place along the route of the “Great American” and they’ll be broadcasting it all live, on their web site and Facebook page.

Part of the route is expected to follow a part of the Ohio to Erie Trail, and there's a local event to announce the news in Columbus; check it out on Facebook.
Posted by Century Cycles at 5:00 AM No comments:

Mother's Day Sale! 10% OFF all new bicycles for Mom! 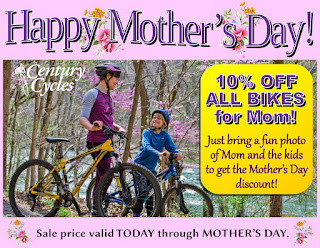 In appreciation of all the moms out there, Century Cycles is offering them 10% OFF all new bicycles, now through Mother's Day (May 12, 2019)!
Posted by Century Cycles at 10:52 AM No comments: 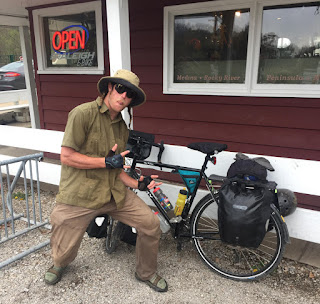 Sean, our latest bicycle touring visitor, arrived at the Century Cycles store in Peninsula on Monday, April 29, 2019 on his Surly Disc Trucker. He left his home in Taos, New Mexico about three weeks earlier, and is headed east to visit family in his former home of Maine. Good luck and have fun, Sean!

You can find more photos of long-distance cyclists who have visited all three of our stores in our Bicycle Touring Photo Gallery.
Posted by Century Cycles at 6:00 AM No comments: 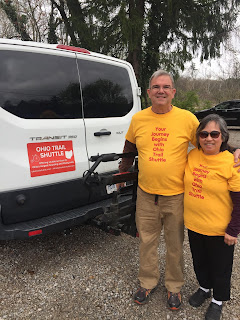 Mr. & Mrs. Brian Peters stopped by to visit the Century Cycles store in Peninsula earlier this week. They are the proprietors of Ohio Trail Shuttle, a relatively new business based in the Columbus, Ohio area. They can help you if you are planning a bicycle trip on the Ohio to Erie Trail.

The Ohio to Erie Trail is a 326-mile bicycle route connecting Cincinnati and Cleveland using a combination of paved and unpaved bike trails and roads. There are many resources available along the way for food and lodging, including both hotels and camping.

You can make arrangements with Ohio Trail Shuttle to, for example, pick you up in Cleveland and drive you and your bicycle to start your bike tour in Cincinnati. Or, you can pedal from Cleveland to Cincinnati, and they will pick you up at the end of your trip and drive you back to Cleveland. You can also come up with custom trips; just talk to them about your needs!

For more information, go to: www.ohiotrailshuttle.com
Posted by Century Cycles at 6:00 AM No comments:

It's National Bicycle Month! Take the May Bike Challenge! 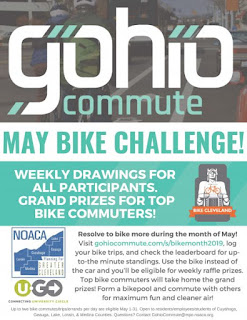 Ride your bike to work and use it for errands during the month of May and take the challenge! It’s easy! Just register on Gohio Commute, log your bike commutes during May (you can link your account to Strava for automatic logging), and follow the leaderboard for up-to-the minute standings. Up to two bike commutes/errands per day will count toward your standings.

Use the bike instead of the car and you’ll be eligible for weekly raffle prizes, and top bike commuters (1st, 2nd, and 3rd place) will take home the grand prizes! Drawings will be held in the event of ties. Form a bikepool and commute with others for maximum fun and cleaner air! Prizes include Gift Cards donated by Century Cycles!

The small print: This challenge is open to residents/employees/students in Cuyahoga, Geauga, Lake, Lorain, & Medina Counties. If you have additional questions about Gohio Commute or need technical help with logging in and the like, please contact GohioCommute@mpo.noaca.org for more information.
Posted by Century Cycles at 6:00 AM No comments: