Inspired by the new Salsa Fargo adventure touring bike, I wondered if it would be possible to take my perfectly-good Raleigh XXIX singlespeed mountain bike and convert it to a geared off-road touring bike. Something ideal for doing the Great Divide Mountain Bike Route or the Great Allegheny Passage. Not that I have plans for doing either of those trips in the near future, but once I got the idea for the bike in my head, I couldn't sleep until I tried to build it.

Here is the original bike in pretty much stock condition (i.e. BEFORE conversion): 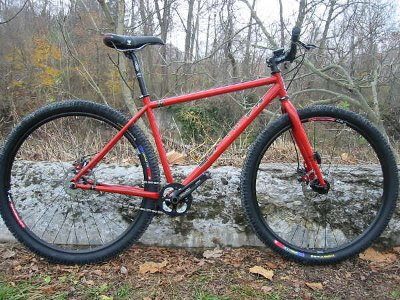 Here it is, AFTER: 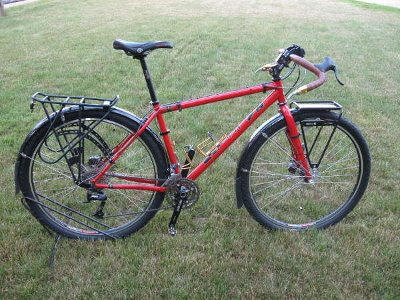 Weighing in at a total of 37 pounds, it definitely won't set any speed records, but it handles like a steamroller, and I mean that in a good way--point it where you want to go, and it handles steady and on track through gravel, dirt, bumps, and potholes.

There were a number of challenges in trying to make a bike designed and optimized as a singlespeed to work with a full complement of gears. I had originally hoped to use the super-fat Schwalbe Big Apple 29x2.35 tires. They fit great in the frame, but did not leave enough clearance for the front derailleur, so I had to scale back and use the Serfas Drifter 29x2.0 tires instead. These are great tires as well; we sell a ton of the 26-inch versions, and they are ideal for Towpath and other mixed paved/unpaved trail riding.

The front derailleur choice itself was tricky, as I had to find one that had as much of the pivot mechanism as possible situated toward the side, rather than towards the rear, to allow clearance for both the rear tire and fender. Luckily, I happened to have an old Shimano Deore LX in my personal parts supply that fit the bill.

Problem Solvers Backstops provided the cable stops for the derailleur cables that are not normally found on a singlespeed.

You can check out more pictures and a full component list on our Bike Gallery.
Posted by Kevin at 5:43 PM