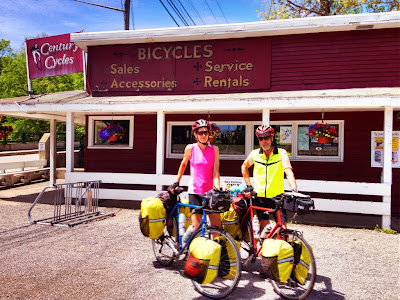 The spring weather that has finally arrived here in Northeast Ohio has been a boon for cyclists, and especially for long-distance touring cyclists, who have no choice but to continue on whatever the weather.

This couple visiting our Peninsula store yesterday while riding north on the Underground Railroad Bicycle Route. Once they reach the end of the route in Canada, they'll continue riding back to their home of Muskegon, Michigan.

Most of the the bike touring riders we see are on the Underground Railroad Bicycle Route. Both our Peninsula and Medina stores are located on the route. This route was established in 2006 by the Adventure Cycling Association to highlight the historical significance of the many places between the Gulf coast and Lake Erie that helped enable escaped 19-century slaves to reach the safety of the North. You can read more about the route here, as well as order maps so you can follow the route yourself!

Our Rocky River store is located on another of Adventure Cycling's popular cross-country bike routes, the Northern Tier Route.

You can see more photos of touring cyclists who have visited all three of our stores in our Bicycle Touring Photo Gallery.
Posted by Century Cycles at 8:00 AM