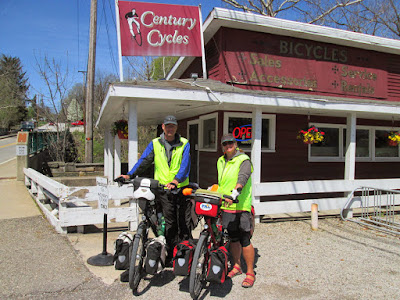 The bicycle touring season is upon us, and these two visitors in Peninsula have kicked it off in a big way!

Eric and Astrid are from the Netherlands. They started their around-the-world bicycle trip in April of 2013, and spent eight months pedaling around Europe. After tour of a few Central American countries, they flew to Miami, and headed north from there. They've been traveling the Underground Railroad Bicycle Route, which they'll follow to Toronto, then head across Canada to Vancouver, then head south to Los Angeles, then catch a place to either Australia or Asia.

They are riding to raise awareness for the International Fund for Animal Welfare. You can read more about them on their web site at: http://weerkommen.webklik.nl

You can see more photos of touring cyclists who have visited all three of our stores at the Century Cycles Bicycle Touring Photo Gallery.
Posted by Century Cycles at 12:16 PM