Watch out for the marching band! 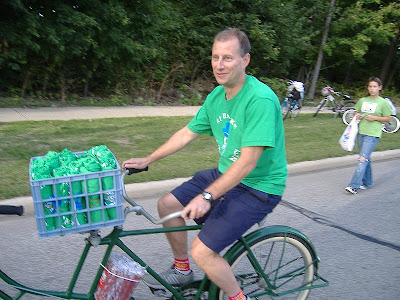 Scott dug out an old tandem from his bike collection to ride in the Bay High School (BHS) homecoming parade back on September 19, throwing Bike To School t-shirts and Twizzlers to the crowds lining Wolf Road in Bay Village.

Scott was riding with the school's Project Earth Environmental Club, which is a co-organizer with Century Cycles of Bay Schools Bike To School Challenge. Last May, Century Cycles helped BHS students save over 14,000 pounds of CO2 emissions by bicycling instead of driving to school. Stay tuned for an upcoming announcement about the Bay Schools Bike To School program for 2009, which will be twice as big and better than ever!
Posted by Tracey at 12:16 PM