After taking care of business catching up with our main vendors all during the first day of the show, today I thought I'd just show you a little eye candy. Let's start by returning to Bianchi. Here's their top-of-the-line road bike, the 928 Carbon SL. With Campagnolo Record Carbon components, it comes in at just 14.3 pounds! 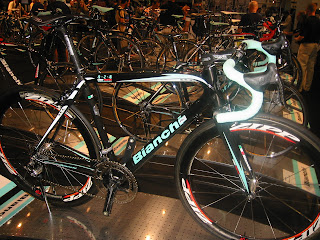 A bike shop called The Bike Nut in San Diego took the 928 Carbon SL frame and swapped out some of the components for even lighter weight options. This custom version is a complete, ridable bike at only 11.1 pounds! 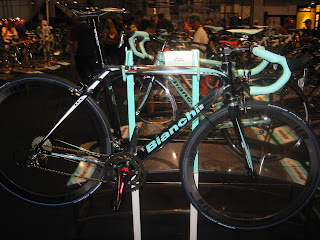 Vicious Cycles is a small custom frame builder based in New Paltz, New York. They do amazing things with their paint jobs, as you can see from these two samples: 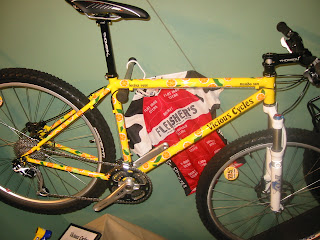 The two bikes above are mountain bikes that use the 650B wheel size, which is NOT the same as the 650C wheel size found on some triathlon and women's bikes. After reading all of my talk about 29er mountain bikes, you'd think that the last thing we need is another wheel size, but there are those out there who are always looking for an excuse to push the envelope. The original 26" mountain bike tire standard came about more or less by accident, as that was the only size tire available in a wide, knobby version when mountain bikes were first developed. There are those who think that the new 29" wheels force too many compromises in frame geometry, and that the 650B size (roughly 27.5") provides the best balance of traction, handling, and strength. As was originally the case with 29" wheels, there aren't a lot of options from manufacturers at this point for rims and tires. I asked the guy from Vicious how these bikes felt in their test rides, and he said "I don't know." They are brand new and these two in particular have never been ridden; they wanted to keep them clean for the show!

Quality Bicycle Products, one of the major parts and accessories distributors, is also the parent company of Surly and Salsa. For 2008, they are launching a new line of high-end commuter-oriented bikes called Civia. Most will feature internally-geared hubs, and lots of cargo-friendly options. Here's one sample: 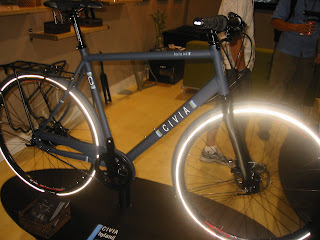 Speaking of eye candy, here's a little more courtesy of O'Neal and SRAM: 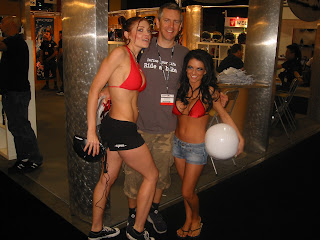 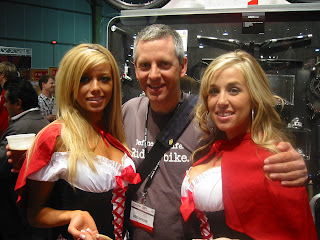 After the show, we were treated to dinner by Raleigh, and then we all headed over to the Mandalay Bay hotel to watch the USA Crits Final race. Getting good pictures was tough, with the combination of my low-end digital camera, the evening lighting, and the speed of the riders, but here are a few of my attempts for your enjoyment: 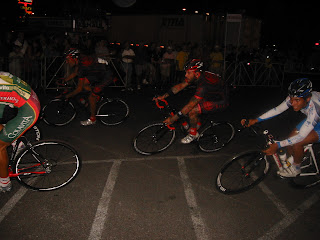 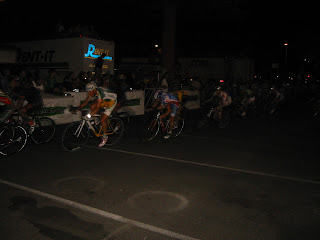 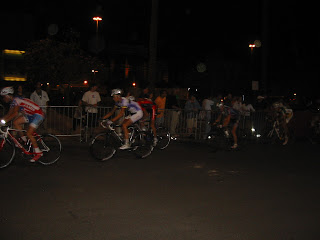 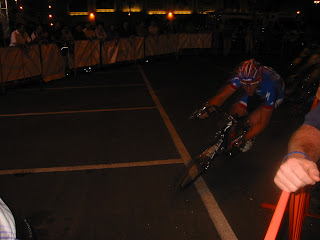 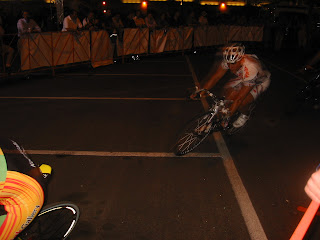