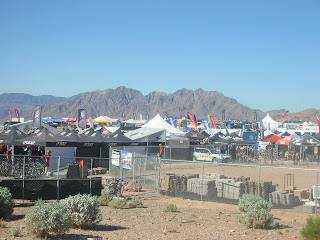 The Interbike Outdoor Demo was held at Bootleg Canyon in Boulder City, NV on Sept 24-25. I made it to the second day of the demo yesterday.

I rode this Salsa El Mariachi first because I was just anxious to get riding and it was the first thing that caught my eye. It's a steel-frame rigid 29er mountain bike set up with a 1x9 drive train (single chainring up front, regular 9-speed cassette on the back). It rode pretty well, similar to my Raleigh XXIX, but much lighter. 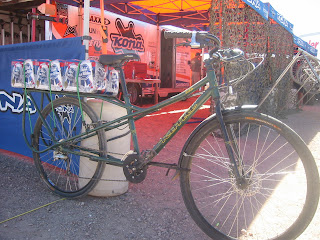 I didn't ride this bike, but I like the way they're thinking... 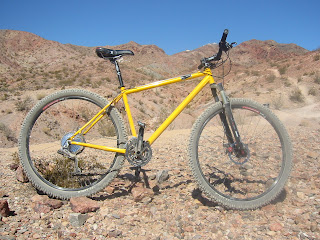 This is the '08 version of the Raleigh XXIX+G, their geared 29er mountain bike. We had the singlespeed version of the XXIX in our stores, but this was the first chance I had to see and ride the geared version in person. I was pleasantly surprised, as it did not feel as heavy as I expected. The RockShox Reba fork did a good job of smoothing out the rough patches of trail. The drive train is a mix of SRAM X.5/X.7, which is similar in quality to Shimano Deore/LX, and it worked flawlessly. As on the Salsa El Mariachi, the big 29" tires provided great grip on the trail for the climbs, descents, and swoopy banked turns. Two big thumbs up! 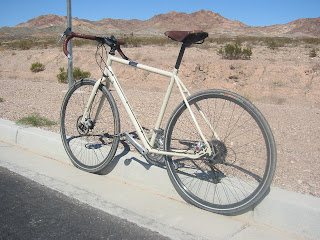 Brand new from Raleigh for 2008 is the Sojourn. A few of us at the shop have been eagerly following the sneak previews of this bike on Raleigh's blog. It's a steel-framed road touring bike, which would also be great for the heavy-duty commuter or messenger crowd. It's got the popular Avid mechanical disc brakes for good stopping power in all weather. Note how the rear brake caliper is mounted on the chainstay, rather than on top of the seatstay. This means you can use pretty much any rear cargo rack you like without worrying about the brake caliper getting in the way, a common problem on most other disc brake-equipped bikes. Also note the unique flared-out shape of the WTB Dirt Drop handlebars. The bar-end shifters may take some getting used to, but you'll learn to love their retro sensibility. Rounding out the retro-chic package is a Brooks saddle and Brooks leather bar tape--very rare on a stock bike! We expect to be selling a lot of these to customers who may have previously looked at a Bianchi Volpe or Surly Cross-Check or Long Haul Trucker. 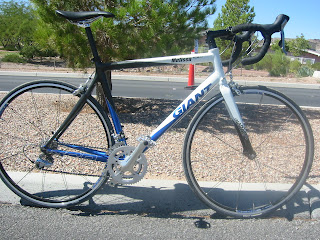 This is Giant's TCR Alliance 1. The bikes in their Alliance series use a combination carbon fiber/aluminum frame to give you some of the ride benefits of carbon at a reduced price. Look in early 2008 for details of a road bike demo program that we'll be offering using a similar bike from Giant, the OCR Alliance 1. Before arriving at Interbike, I just finished a 9-day 600-mile bike tour in New Mexico. After hauling my 50 pounds of camping gear on my bike, this bike seemed to pedal all by itself. The combo frame didn't dissappoint, providing reliable stiffness without feeling too harsh. The Shimano Dura-Ace drive train performed well, as should be expected. 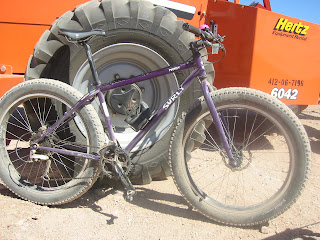 Big Wheels Keep on Turnin'...Very few people in the world really need a Surly Pugsley, but once you ride one, it's such a blast that you'll want one anyway. The 26x4-inch tires on custom Surly Large Marge rims provide traction for any terrain you can throw at it. With that much rubber and air between you and the ground, who needs suspension!??! 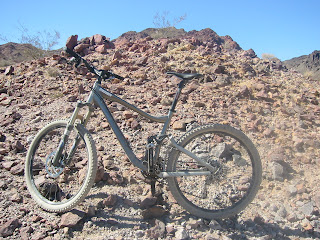 This is the latest incarnation of Giant's Trance 1, their full-suspension 5-inch travel trail bike. The patented Maestro suspension system performed flawlessly. However, that certain undefined "magic" just didn't seem to happen for me with this bike; I seemed to not be able to keep it on track as well as I wanted. It was a personal thing, though, and I would find no reason not to recommend this bike to anyone who is looking for this style of ride. 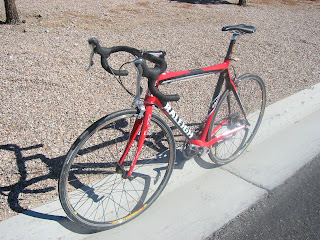 Here is Raleigh's 2008 version of the Prestige, one of their line of full-carbon road bikes. It's the big brother of the less-expensive Supercourse that we carried in our stores for 2007. What can I say; light, fast, responsive, top-notch Dura-Ace drive train; nothing to worry about but the wind in my hair. 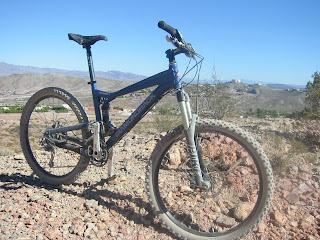 The Diamondback Mission 3 gave me my second pleasant surprise. It's a 5-inch travel trail bike, built beefy to take the rougher stuff, but it handles amazingly light. The RockShox Pike fork up front and the proprietary KnuckleBox link suspension in the rear smoothed out the bumps and rocks, while the wheels hugged the trail very nicely. While pushing the limits on a downhill section of trail, I suffered my only crash of the day, doing a double tuck-and-roll and gaining a nice coating of desert dust on myself. Purely rider error... 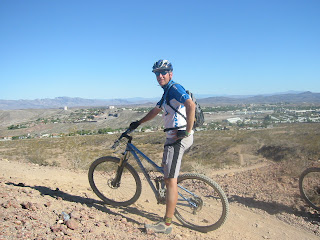 Here I am on my final ride of the day, on a Niner Bikes R.I.P. 9. As you may have guessed, I've become a big fan of the 29er concept. This is one of Niner's full-suspension models. Me like!
Posted by Kevin at 10:43 AM