Yesterday (Wednesday 09/26) was the first day of the indoor trade show segment of Interbike. Here's a shot of the restless hordes waiting to be let in the main doors at 9am sharp: 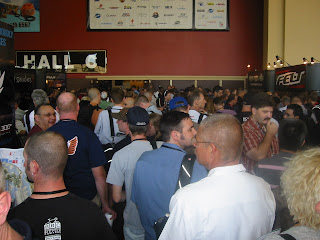 I headed straight to the Surly booth for to check out what was new for the coming year. Each year, they come up with a new product, sometimes something major like a new bike model, or sometimes not so major like a new component. This year it turned out to be a sort-of new bike, what they are calling the "Traveler's Check." It's the Cross-Check bike with S&S Couplers that allow it to be broken down and packed into an airline-regulation suitcase, perfect for the touring cyclist or traveling 'cross racer. Check out the sweet blue paint job. It comes with a new stainless steel seat post collar and new cantilever brake hanger. The new seat collar is smaller and more sleeker-looking than their old "Constrictor" seat collar, and will come standard on all of their frame models from now on, except for the Instigator mountain frame. 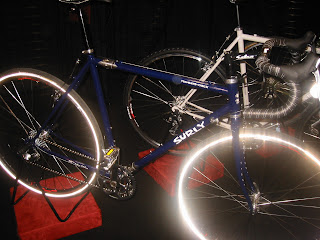 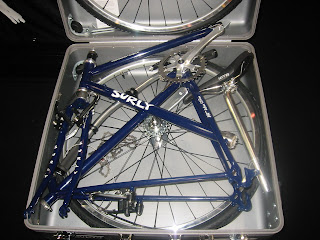 Next up on our agenda was a meeting with Bell Rehor to check out the latest lineup of Bell and Giro helmets and Blackburn accessories. We'll probably be carrying pretty much the same models as we did this past year; just look for updated color options. 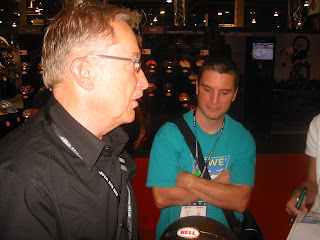 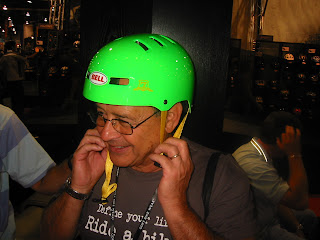 Next we headed over to Raleigh, where Sean Burkey stepped us through their new '08 line. Nothing earth-shaking in the traditional road or recreational mountain bike line that we typically carry; just updated colors of course. The biggest change was that they discontinued the Cadent series of recreational drop-bar road bikes. However, they transferred the Cadent name to their line of flat-bar road bikes. The Cadent FT1 is similar in spec and price to the old Route 1, and likewise, the Cadent FT2 and Cadent FT3 correspond to the old Route 24 and Route 66. They really updated the design and graphics on the frames, however, to give them a much sportier look. And, for the flat-bar road enthusiast who wants a little bling, it also comes in a full-carbon version, the Cadent FC: 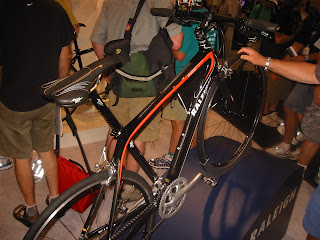 I mentioned the new Sojourn touring bike that I tried at the Outdoor Demo on Tuesday; here's an indoor shot of it--the fenders and rear rack are included with the bike: 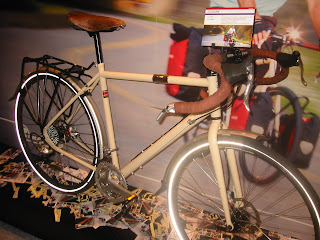 By the way, for '08, they will also have the Brooks saddle and Brooks leather bar tape on their One-Way singlespeed road/commuter bike.

Of course, no report of mine would be complete without mentioning the 29er's. The Raleigh XXIX and XXIX+G are relatively unchanged for this year (other than color). However, Raleigh's Diamondback division has come up with two brand new 29er's. The first is the Overdrive, an entry-level model with Shimano Alivio drivetrain and RockShox Dart fork. At around $650, no other manufacturer can touch this value for a complete 29er: 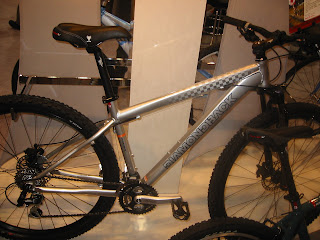 The other DB 29er model is the Overdrive Pro, up-spec'ed with a Shimano Deore/LX drive train and RockShox Reba fork: 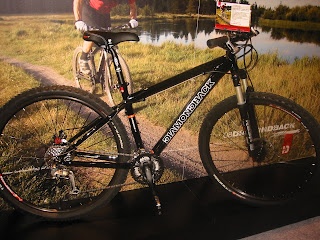 Next we headed over to Giant, where Larry Lewallen showed us their latest line. Just like with Raleigh, nothing out of the ordinary in their main road and mountain line; the same solid and reliable stuff that we've been working with. 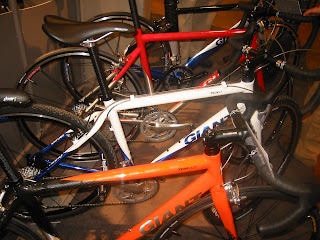 One change is in the women's-specific road models; in the past, they felt that their compact road geometry worked equally well for men and women, but starting in '08, they are making adjustments to the frame geometry for the women's models. 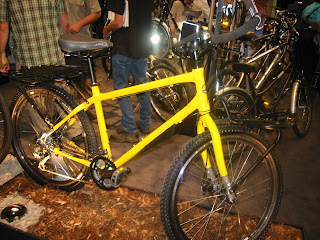 In keeping with the trend of fighting high gasoline prices, Giant is also coming out with a new line of electric bicycles, but don't look for them any time soon in our stores. Just to keep things confusing, they are calling these bikes "hybrids."

We chatted a bit and got autographs from Kelli Emmitt, pro racer on Giant's mountain bike team and two-time Iceman champion: 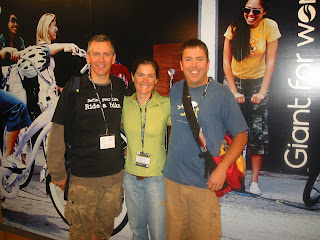 Next, it was on to Mavic the see their latest wheel technology. For the weight-conscious rider where money is no object, their brand new R-SYS wheelset has straight-pull carbon fiber spokes and come in at around 1399 grams per pair, at a price of $1,399.99 per pair. The only dollar-per-gram wheelset on the market! 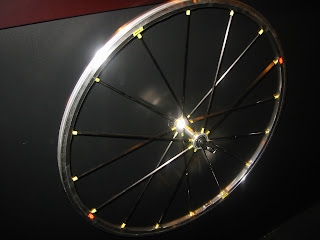 Gary Thomas showed us how Electra always keeps things fresh with Townies and cruisers in a seemingly endless array of colors. New for this year is the Townie Balloon series, which come with even fatter tires in a retro tan color: 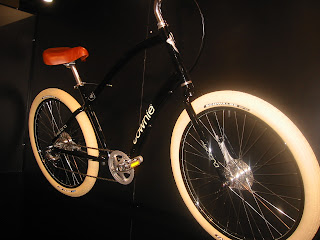 There's a Townie built for two: 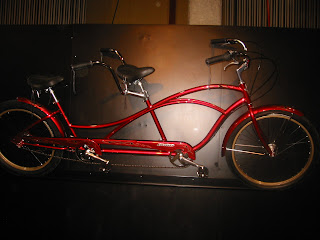 The Amsterdam models will be available in new fashion colors: 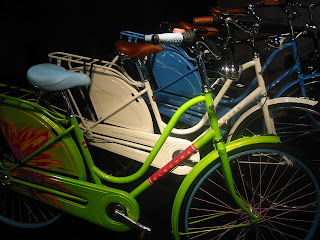 My personal favorite of Electra's new models is the Amsterdam Sport 9D. Both the messengers and the soccer moms down at your local Caribou Coffee will be jealous of the retro-chic look combined with a modern 9-speed Shimano Tiagra drive train. To top it off, they jump on the Brooks trend, with a Brooks leather saddle and Brooks leather grips--purchased separately, you'd be paying $175 for those two items alone! 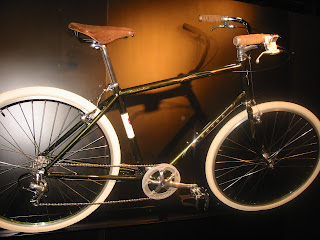 Finally, we ended the day with a visit to Bianchi, where our rep Kevin showed us their updates. Most of note to us was that they finally got rid of the Gang Green paint job on the popular Volpe cyclocross bike. Not that I have anything against the Gang Green; I own one myself, but after four years, it was due for an update. The new color is gold; the picture probably doesn't do it justice, but it looks pretty nice in person: 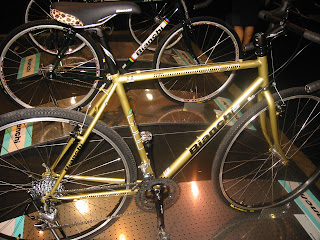 The rest of the spec on the Volpe is pretty much the same as the previous couple of years, from the reliable drivetrain that is a mix of Shimano Deore and Tiagra with a Sugino touring triple crankset, to the love-it-or-hate-it leopard-print saddle.

In Bianchi's road line, they have developed a new technology used in all of their carbon frames and forks called K-VID, which is a Kevlar wrap that helps enhance the vibration-damping qualities of the carbon fiber components.

In the mountain line, Bianchi has discontinued all of their 26-inch singlespeed models (recall the W.U.S.S., M.U.S.S., P.U.S.S., etc.). Their only singlespeed is the 29-inch wheeled Sok, which also comes in a geared version. Both have a suspension fork. In case anybody asks, "sok" is Italian for "stump." 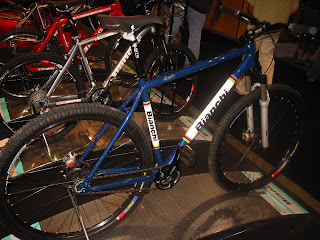 In Bianchi's road singlespeeds, they will continue to offer the Pista track bike in Chrome, as well in a blue similar to the Sok shown above. The San Jose is relatively unchanged in British Racing Green.

At the close of the day's business, we gathered for a couple of frosty beverages courtesy of Mavic: 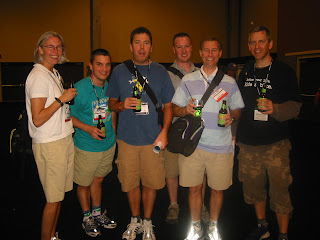 Later, a few of us headed over to a party thrown by Shimano in honor of the 25th anniversary of their Deore XT mountain bike component group: 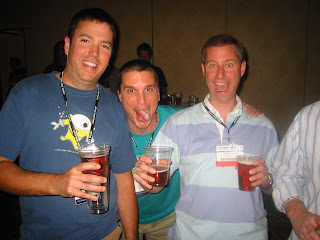 Later still, a few of us took a cab over to the Rain night club at The Palms hotel and casino to catch the premier of the new mountain bike video "New World Disorder 8: Smackdown." Following the video, the crowd was treated to the musical melodies of the group "Nashville Pussy." Ah, Vegas...
Posted by Kevin at 10:43 AM