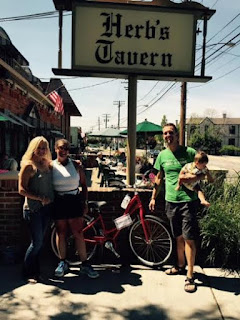 Congratulations to Christine Cowen, the winner of the Raleigh Bicycles Circa 1 bike at the finale party for Bike to Breakfast at Herb's Tavern of Rocky River on August 23!

Christine (no relation to Century Cycles owner Scott Cowan) first went to Herb's Tavern earlier this year, to kill time while waiting for our Rocky River store to open to get a flat tire fixed on her bike. She ended up coming back to Herb's (and Century Cycles) multiple times, which really helped her odds of winning the bike! She was so confident that she was going to win, she RAN from Lakewood to Herb's so she could ride the bike home!

Christine is pictured above (in white, second from left) with Herb's Tavern owner Kim (on the left) and Josh from the Century Cycles store in Rocky River (with his baby girl Layla).

Stay tuned for Bike To Breakfast at Herb's Tavern in 2016!
Posted by Century Cycles at 7:00 AM