It's bicycling touring season, and as such, we've already seen the first groups of long-distance riders stopping by the Century Cycles stores! We had two groups come through Peninsula the past Wednesday: 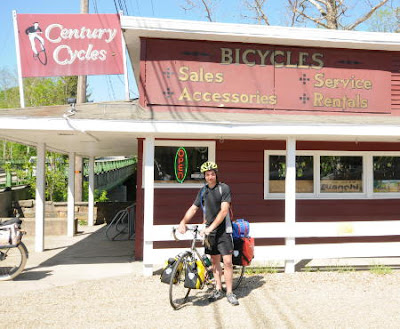 Above is Keith Blume, from Jamestown, New York. He's riding from his home to the west coast, following the Underground Railroad Bicycle Route, then the Transamerica Route, then the Lewis & Clark Route. We fixed him up with a pair of gloves and some replacing a broken spoke. You can follow his trip here: www.crazyguyonabike.com/doc/leavingtrunk 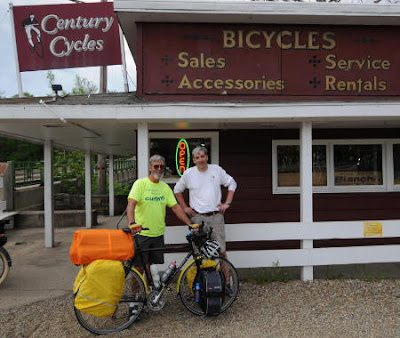 Here are Mike Nelson and Jeff Brown, making their way from their home in Bowling Green, Ohio to Newport, Rhode Island. We swapped some chainrings on Jeff's bike to give him some lower gears to handle the unexpected hill climbs he encountered in Northeast Ohio!

We've been posting photos of people on bicycle tours for a couple of years now. To make it easier for you to check out other other pictures of people on bike tours, we've collected all of them in a new page on our web site, the Century Cycles Bicycle Touring Photo Gallery!
Posted by Kevin at 9:08 AM