Bicycle touring visitor warms up in Peninsula during snowstorm 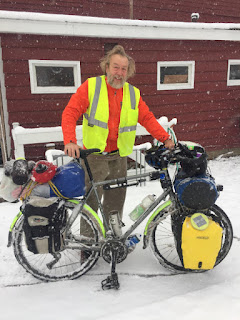 With what could possibly be the latest bicycle-touring visitor we've ever had in a season, Kurt stopped into the Century Cycles store in Peninsula today (Tuesday, November 12, 2019) to warm up after getting stuck in our first snowstorm of the season! He left Cincinnati on Monday, November 4 and has been riding the Ohio to Erie Trail towards Cleveland, camping along the way.

Although we have to say that our toughest bike touring visitors were still Wilson and his chihuahua Polo, who were riding through the area in single-digit temperatures back in January of 2014!

You can see photos of bike touring visitors in all three of our stores in our Bicycle Touring Photo Gallery.
Posted by Century Cycles at 1:25 PM