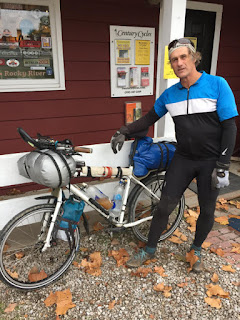 We had a late-season bicycle touring visitor at the Century Cycles store in Peninsula today! Doug grew up in Columbus, Ohio, but has lived in Bozeman, Montana since 1977, working as a ski and mountaineering guide.

Doug has spent the past year back in Columbus caring for his aging parents, but was able to take a break for a few days to meet some friends at Cedar Point amusement park in Sandusky, Ohio. He left Sandusky yesterday, and is making his way back to Columbus on the Ohio to Erie Trail. Happy Trails, Doug! His bike is the Surly Bikes World Troller.

You can see more photos of bicycle-touring visitors that have visited all three of our stores in our Bicycle Touring Photo Gallery.
Posted by Century Cycles at 5:03 PM