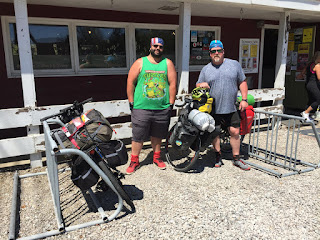 We had our first bicycle touring visitors of the 2018 season at the Century Cycles store in Peninsula today! Nick (left) and Gary (right) are riding from New York state on the Adventure Cycling Association's Underground Railroad Bicycle Route. Nick is just joining his friend for a couple of weeks. Gary intends to continue to where the UGRR meets the TransAmerica Trail in Kentucky, and follow that route west to its end in Astoria, Oregon. Good luck and have fun, guys!

You can see more photos of long-distance touring cyclists that have visited all three of our stores in our Bicycle Touring Photo Gallery.
Posted by Century Cycles at 2:14 PM