East Rim mountain bike trail in CVNP to be paved 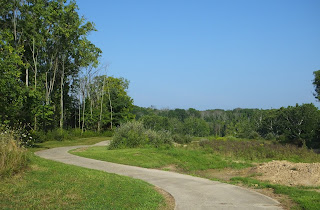 In a statement released today by the Conservancy for Cuyahoga Valley National Park, it was announced that they have been awarded a $1.7 million grant to their Trails Forever Fund. The grant will will be used to fund a paving project for the East Rim Mountain Bike Trail.

"With the number of riders, hikers, and runners using the East Rim Trail when it's closed due to wet conditions, the cost of maintaining the dirt surface has become unsustainable. It is more cost-effective to put our resources into paving the trail," said a spokesperson for the Conservancy.

"We're looking forward to getting more people on mountain bikes with the new accessibility that pavement will bring to the East Rim Trail system," a representative of the Cleveland Area Mountain Bike Association (CAMBA) said. "The new paved Inner Line on Phase 2 will be the first purpose-built paved downhill mountain bike trail in the world."

Scott Cowan, Owner of the local Century Cycles bicycle shops, added, "This will generate a lot of new business for our stores as well as other local bike shops. It's a win-win for all. Not only more bike sales, but the bike industry is gearing up to produce new lines of pavement-specific mountain bike tires."

Work on the paving project will begin immediately, with completion expected in August of 2017.

Posted by Century Cycles at 8:32 AM