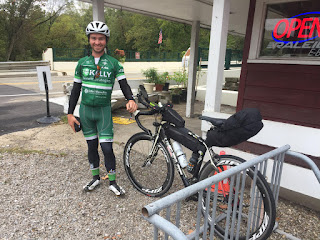 When we saw this cyclist pull up to the Century Cycles store in Peninsula this morning on a semi-loaded bike, we thought, "Hmm...this guy looks like he's going somewhere." Sure enough, he is on his way to Chicago, IL for the start of the first-ever Route 66 Bike Race. He left his home in Selinsgrove, PA a couple of days ago, and he needs to get to Chicago by Friday, because the race starts on Saturday, October 1! The race follows the new Adventure Cycling Association Bicycle Route 66 from Chicago to Santa Monica, California.

The man is Jesse Stauffer, an experienced endurance bike racer. He appeared in the film Ride the Divide, about the Tour Divide Race on the Adventure Cycling Association Great Divide Mountain Bike Route. He also appeared in the film Inspired to Ride, about the inaugural Trans Am Bike Race in 2014, which takes place on the Adventure Cycling Association TransAmerica Trail. He ended up finishing tied for fourth place in that race, and the first American across the finish line.

We told him that he'll probably end up catching up to Krista from our Rocky River store, who began a self-supported tour in Chicago on Bicycle Route 66 last Saturday! Jesse said that he expects to finish the race in about 10 days, riding day and night, stopping for just a few hours sleep at a time.

Good luck, Jesse, and say Hi to Krista for us!
Posted by Century Cycles at 11:48 AM