We tried to get an even earlier start than usual on our last day, hitting the Ohiopyle Bakery and Sandwich Shoppe for breakfast soon after they opened around 6:15am, then we hit the trail a little after 8:00am. 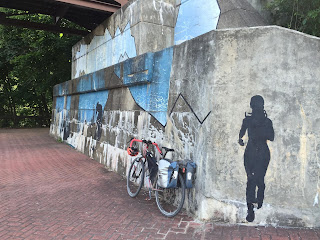 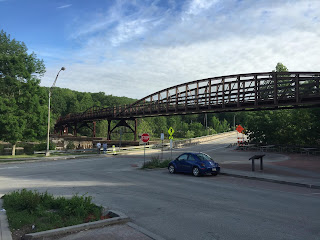 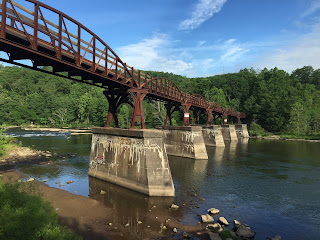 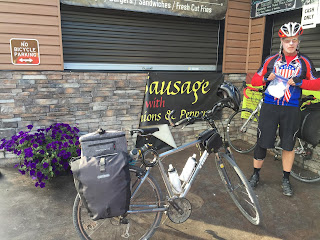 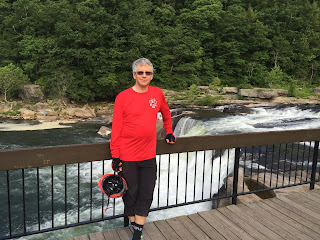 A couple miles outside of town, we came across a group of four riders from Massachusetts using a do-it-yourself repair station. 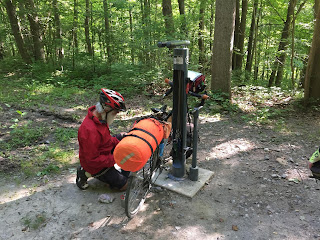 The trail is relatively flat here in the northern section. We made good time to Connellsville. 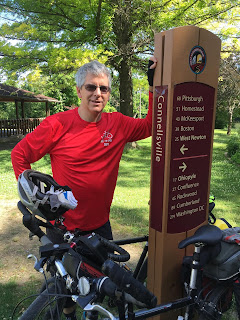 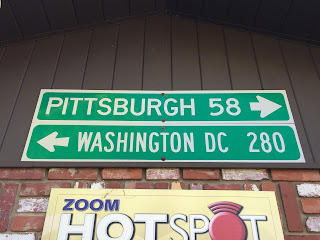 The next major stop was West Newton for lunch at The Trailside Restaurant & Pub. 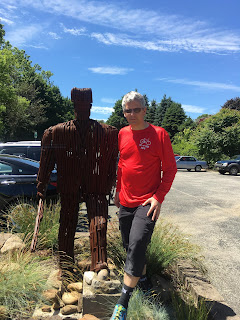 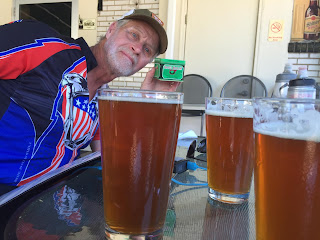 Mike, Ted, and Troy skipped our lunch stop and make a quick push to get to Pittsburgh and on the way home. Bill, Jim, Peter, Tom, and I enjoyed a leisurely lunch then got on our way.

A few miles short of the village of Boston, or "Little Boston" as it's known, we passed an older gentleman pushing his bike along. We asked if he were okay; he said yes, I just have a flat tire. We asked if he had what he needed to fix it, and he said no, so Jim said, "Well, you're not okay then!" We stopped and lent him a spare tube, and replaced it for him. He was very grateful and wanted to pay us back in some way, but we told him to pay it forward. We told ourselves that we just paid for the perfect weather that we enjoyed the whole trip.

I was most anxious to see the newer parts of the trail going into Pittsburgh. I used to ride the parts between Connellsville and Confluence on a regular basis, and the final stretches leading into the city were not completed until recent years after I had moved away from Pittsburgh.

From Boston to McKeesport, there are some new stretches built that take you away from the Yough river and up into the hills a bit, in order to go around some industrial sites, some abandoned and some still in use. Through McKeesport, you follow a couple of low-traffic back streets and new paved trails behind the downtown area and then past some more industrial and post-industrial sites. 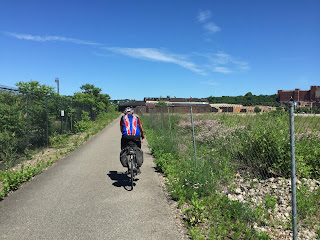 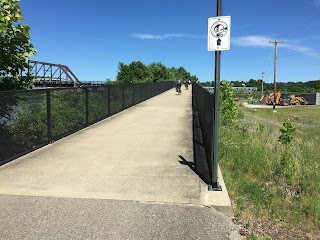 The trail crosses an old railroad bridge over the Monongahela River, then does some more gently rolling pavement up on the ridge away from the river, including just behind the Kennywood Park amusement park. 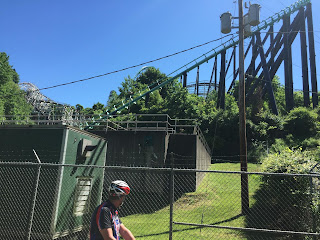 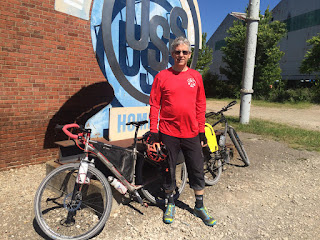 The trail winds its way through some new retail and residential developments on both paved and unpaved surfaces, past the Sandcastle water park, and to the South Side. You make a right over the Hot Metal Bridge to cross back over the Mon river, but before that, we took a couple-blocks detour to grab a final celebratory beer at Over The Bar Bicycle Cafe. 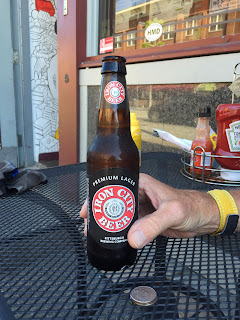 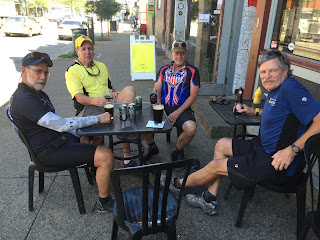 A couple of short miles on paved trail took the five of us back to the First Avenue Garage and our finish line.
I was the only one interested in going to Point State Park for the final finish photo op, so we said our goodbyes, and I headed off down the street and "pedaled to The Point," the ceremonial end of the Great Allegheny Passage, and the place where the Allegheny and Monongahela Rivers meet to form the Ohio River. 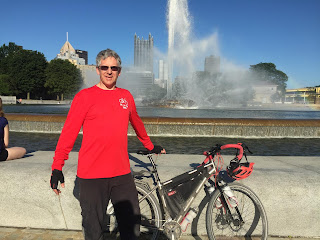 I cannot gush enough about the C&O Canal Towpath and the Great Allegheny Passage Trails. They are a perfect example of the "if you build it, they will come" scenario. Not just one city, but three states, the District of Columbia, dozens of cities and towns, trail advocacy and fund-raising groups, and thousands of dedicated volunteers have come together to create a destination that is attracting visitors from literally around the world.

I visited many of the towns along this route many years ago, and was flabbergasted by the changes the trail has brought them since. What were once one-horse towns with maybe a convenience store have blown up into full-service trail towns, with new hotels, restaurants, campgrounds, and bike shops.

The route is easy to ride, and easy to follow, well-marked with helpful signage every step of the way. If you're looking to check an item off of your "bike-it" list, hit the C&O Canal Towpath and Great Allegheny Passage Trails as soon as you can! Go to www.nps.gov/choh and gaptrail.org for help in planning your visit (or stop in and talk to the experienced veterans at Century Cycles!)
Posted by Kevin Madzia at 9:30 PM