THE PROGRAM - Available on DVD May 17 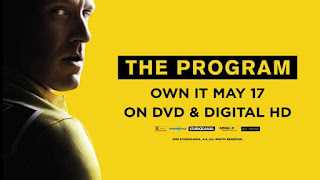 Ben Foster and Chris O'Dowd star in one of this year's best movies, THE PROGRAM. When an Irish sports journalist becomes convinced that Lance Armstrong's performances during his Tour de France victories are fueled by banned substances, he begins the hunt for evidence that ends up changing the world of cycling as we know it. THE PROGRAM is available on DVD May 17th, 2016.

THE PROGRAM is based on the book Seven Deadly Sins: My Pursuit of Lance Armstrong by David Walsh.

"A thoroughly good read on one of the most compelling sporting stories of our time, told by one of the key protagonists in the collapse of the sorry house of cards. Compelling indeed." --The Sports Book Review

When Lance Armstrong won his first Tour de France in 1999, the sports world had found a charismatic new idol. Journalist David Walsh was among a small group covering the tour who suspected Armstrong's win wasn't the feel-good story it seemed to be. From that moment of doubt, the next thirteen years of Walsh's life would be focused on seeking the answers to a series of hard questions about Armstrong's astonishing success.

As Walsh delved deeper into the shadow world of performance-enhancing drugs in professional athletics, he accumulated a mounting pile of evidence that led a furious Armstrong to take legal action against him. But he could not make Walsh--or the story--go away, and in the autumn of 2012, Walsh was vindicated when the cyclist was stripped of his seven Tour de France titles.

With this remarkable book, Walsh has produced both the definitive account of the Armstrong scandal, and a testament to the importance of journalists who are willing to report a difficult truth over a popular fantasy.

DAVID WALSH is a chief sportswriter with The Sunday Times (London). A four-time Irish Sportswriter of the Year and four-time UK Sportwriter of the Year, he was also named the 2012 British Journalist of the year. Coauthor of L.A Confidential: The Secrets of Lance Armstrong and author of From Lance to Landis: Inside the American Doping Controversy at the Tour de France, he is married with seven children and lives in Cambridge, England.
Posted by Century Cycles at 6:00 AM