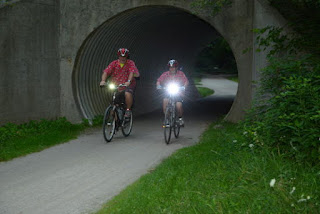 The Ohio & Erie Canal Towpath Trail is one of Northeast Ohio’s most popular bicycle paths by day. Riding it by moonlight is an entirely different experience that bicyclists can enjoy on Century Cycles Night Rides on the Towpath Trail, now back for their 22nd year this spring!

The 2016 season of Century Cycles Night Rides on the Towpath Trail begins on Saturday, April 23. The rides start at 8:00pm at the Century Cycles bicycle store in Peninsula (1621 Main Street, on Route 303 next to the Winking Lizard Tavern). They are FREE and open to the public, and no advance registration is required. Plan to arrive by at least 7:30pm to have plenty of time to find parking, get yourself and your bike ready, and check in.

In 2016, there are 10 Century Cycles Night Rides, all on Saturday nights. The dates are:
* These are special event rides; see more details below.

Led and supported by the bike store’s staff, Century Cycles Night Rides on the Towpath Trail are casual, ride-at-your-own pace bicycle rides (not races) about 14 miles long. They all begin and end in the parking lot of Century Cycles bike store in Peninsula. Parking is available at the Lock 29 Trailhead, just north of the store.

Open to all skill levels, participants must sign a waiver prior to riding (one waiver is good for the whole season). Riders must have their own bicycle, helmet, and headlight (the Towpath Trail is unlit at night and very dark). Children under 16 years old must be accompanied by an adult. The store is open up until the ride start time for riders who need any last-minute supplies or repairs. After the Night Ride, cyclists usually head to the Winking Lizard Tavern next to the store to recount past adventures on two wheels.

For more information, call Century Cycles in Peninsula at 330-657-2209. Online, please visit www.centurycycles.com/for/NightRides, an informational page that includes videos and photos from past Night Rides and tips for first-time Night Riders.

Started in 1994 as a staff ride, Century Cycles Night Rides on the Towpath Trail have grown dramatically in popularity, now regularly attracting over 150 bicyclists and their families who ride everything from mountain bikes to tandem bicycles on the crushed limestone trail. Century Cycles Night Rides were in the national spotlight in 2009 when Bicycling Magazine, the world’s #1 bicycling publication, dubbed them one of America’s great local rides. In 2010, Bicycling Magazine cited the Towpath Trail as one of the reasons Cleveland is the 39th-best bicycling city in the United States.

Saturday, June 4: Bike Camp-Out Night Ride - The weekend of June 3-5, 2016 has been designated as "National Bike Travel Weekend" by the Adventure Cycling Association to celebrate the organization's 40th anniversary. Century Cycles will be getting in on the fun by offering an OPTIONAL Bike Camp-Out during the Night Ride on the Towpath Trail on June 4. Night Riders who wish to participate must pack their overnight camping gear on their bicycles. After the ride's usual turn-around point, bike-campers will continue for an additional few miles to set up for the night at a pre-arranged location, and ride back to Peninsula the next morning. For full details, registration, and a suggested packing list, go to: www.centurycycles.com/for/BikeCampOut

Saturday, July 9: Pajama Party Night Ride - The Pajama Party Night Ride has been one of the most popular Night Rides ever, and Century Cycles is bringing the event back on July 9. Bike riders are encouraged to wear their favorite sleepwear on the ride (helmets are still required, and make sure clothing does not interfere with bike chain or wheels!). Slumber party-themed snacks will be served at the ride turn-around point.

Saturday, August 13: Conservancy for Cuyahoga Valley National Park Fund-Raiser - Century Cycles appreciates the work being done by the Conservancy for Cuyahoga Valley National Park in maintaining all of our local national park's trails, especially the Towpath Trail and the popular new East Rim Mountain Bike Trail. On August 13, all Night Ride attendees are encouraged to donate to the Conservancy's TRAILS FOREVER Fund. Anyone who makes a donation will be eligible to win a high-end rechargeable bicycle headlight from NiteRider Technical Lighting Systems.

Saturday, September 24: Costume Party Night Ride for National Bike Your Park Day - In further celebration of their 40th anniversary, and in celebration of the 100th anniversary of the National Park Service, the Adventure Cycling Association is promoting September 24 as "National Bike Your Park Day." To help the celebration, Century Cycles' final Night Ride of the season will be transformed into a rolling costume party! The crowd will judge the best costume, with the winner receiving a high-end NiteRider bike headlight! 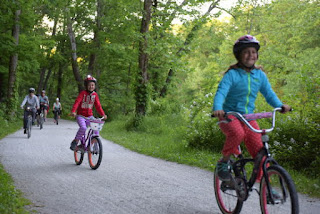