The National Bike Challenge, organized by People for Bikes, concluded on September 30. Congratulations to all Cleveland-area cyclists! We did it -- we beat Pittsburgh! Thanks for riding and logging all of your miles to keep the Rust Cup in Cleveland for the second year in a row!

In the team competition, Century Cycles came in 4th place among all Cleveland-area teams:

Congratulations to ALL teams for the effort!

In the workplace competition, Century Cycles came in 4th place as well among all Cleveland-area workplaces:

Thanks to all of our staff and team members for riding and participating!

We could not have done it without the efforts of two individuals in particular. Krista McNamee, from the Century Cycles store in Rocky River, rode an astonishing 5,671 miles during the 5-month challenge period, placing her as the #4 rider overall in the Cleveland area, the TOP female rider, and the ONLY female rider in the Top 10! Great job, Krista! 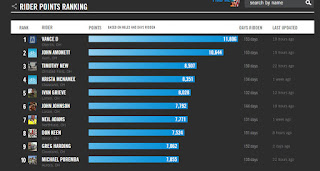 By the way, Krista and Neil do a lot of their riding together with a few other friends. They have ridden all over Northeast Ohio, including the popular Ashtabula County Covered Bridge Loop, many of the Pedaling to Lunch routes, and many more routes of their own creation. So if you're looking for advice on where to ride your bike, talk to Krista or Neil!
Posted by Century Cycles at 8:00 AM