Earlier this year, we reported on the new FixIt bike repair stations installed by the Summit Metro Parks, and helped out with coverage by 19 Action News. The Cleveland Metroparks also have a FixIt station at the Bedford Reservation and are expanding to other locations, as well, including most recently the North Chagrin and Rocky River Reservations.

One of our staff came across this new one at the Summit Metro Parks Munroe Falls Park, near the intersection of the Bike & Hike Trail and State Route 91: 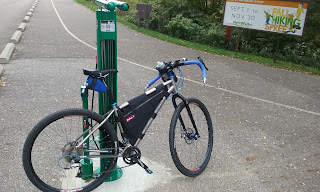 There's also a new one in downtown Akron, on the Towpath Trail near the entrance to the Richard Howe House.

Dero, the manufacturer of the most popular version of the public bike FixIt stations, has created a map on their web site showing all of their known locations. It does not appear to include all of the Summit Metro Parks locations, but it does show one at our new neighbors in Rocky River, Whole Foods Market:

If the map embedded above is not appearing for you, go to:

http://www.dero.com/fixitmap/fixitmap.html
to view it on Dero's web site.
Posted by Century Cycles at 8:00 AM