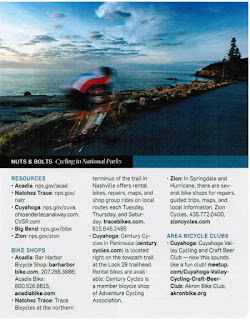 Adventure Cyclist, the magazine of the Adventure Cycling Association, has featured a three-part story by regular contributor Chuck Haney about bicycling in different national parks in the US. Part II the series appeared in the most recent (Aug.Sept. '15) issue, featuring riding in Acadia, Big Bend, Zion, and Cuyahoga Valley National Parks.

Of course, most of the focus was on the Ohio & Erie Canal Towpath Trail, but Chuck also mentioned "an abundance of fine country roads for cycling in the area."

Thanks to Chuck and the ACA for mentioning the Century Cycles store in Peninsula in "Nuts & Bolts" sidebar section of the article!

Century Cycles is a member bike shop of the Adventure Cycling Association. We are proud to be Northeast Ohio's #1 source for touring bicycles, gear, and resources. Our Medina and Peninsula stores are located on the ACA's Underground Railroad Bicycle Route, and our Rocky River store is located on the ACA's Northern Tier Route. Many long-distance bicycle tourists have stopped by all three of our stores during their trips; you can see pictures of them in our Bicycle Touring Photo Gallery.
Posted by Century Cycles at 7:00 AM