Last week, I had the pleasure of visiting Ogden, Utah, the home of the western distribution center of Quality Bicycle Products. QBP is the big-daddy/big-momma company of both Salsa Cycles and Surly Bikes, among other brands, as well as a distributor for a host of other well-known bicycling products.

Every July, QBP hosts their top dealers (like us here at Century Cycles) at an event called SaddleDrive. In addition to meetings, warehouse tours, and great food, the highlight of the trip is that we attendees get to test-ride the latest and greatest bikes from QBP brands.

The festivities kicked off on Sunday evening with a party hosted by All-City Cycles, another sister brand to Surly and Salsa. On display was the latest iteration of their Mr. Pink road bike:
All-City has a fine selection of steel road, cyclocross, touring, and track bikes. We don't carry them in stock, but check them out at allcitycycles.com, and if you see something you like, we can special-order it for you.

Hanging out at the party was Jay Petervary, the Salsa-sponsored ultra-endurance bike racer, best known as the winner and previous record holder of a few past Tour Divide races.
On Monday, at the bike demo up at Snowbasin ski area, they had Jay's actual Tour Divide bike on display:
This is the new Salsa Cutthroat bike that they announced last month. Like its uncle the Salsa Fargo, it's a drop-bar mountain bike designed for off-road touring. But, it's got an all-carbon frame and fork, and different geometry, with a shorter wheelbase built for speed and handling, and bigger frame pack hauling capacity. I got the chance to ride the Cutthroat on the test track, which was a combination of gravel road and singletrack of about one mile.
Like my own Fargo, it felt comfortable and stable at both high and low speeds. It was a bit harsh, as you'd expect of any rigid mountain bike, but the light weight made it a quick climber, and it handled the twisty singletrack like a true mountain bike should. If you're looking for a mountain bike that can do double-duty as a lightweight gravel racer, this bike would fit the bill.

When I attended SaddleDrive back in 2013, it was 100 degrees with what felt like 0% humidity. The last thing I thought I'd need when I packed this year was a rain jacket (or anything with long sleeves, for that matter). But, much to our surprise, Monday morning we woke up to a light drizzle, which continued in the demo area up in the mountains. This gave us a good opportunity for test-riding bikes in more typical Ohio conditions, though!

The bike most in-demand for test rides was the new Salsa Pony Rustler. It's a 120mm travel full-suspension trail bike inspired (in name and design) by the Salsa Horsethief. The Horsethief uses 29er wheels, where the Pony Rustler uses 27.5+ wheels--that is, 27.5 by 3-inch tires:
The Pony Rustler will be available in two carbon and one aluminum option. And here's a little secret: the 2016 Horsethief Carbon X01 and the 2016 Pony Rustler Carbon X01 are identical in frame and parts spec. So, get one bike, get a second set of wheels, and you've got the capability to switch from a regular 29er bike to a 27.5+ bike. Both bikes feature the new Boost hub spacing front and rear, which gives you extra clearance for those wide tires.

So, what's the verdict on the 27.5+ platform? All I can say is WOW. The "plus" size tires give you the dirt-eating traction of a fat bike, with the reduced weight and maneuverability of a traditional tire. Of course, Salsa's exclusive Split Pivot suspension eats up the rocks and roots and keeps everything under control. I see a 27.5+ bike in my future.

Speaking of Split Pivot bikes, next I got to take my first true test ride on the ground-breaking Salsa Bucksaw. Introduced for the 2015 model year as the first production full-suspension fat bike, the Bucksaw returns for 2016 in a full-carbon model:
Call this bike a quiver-killer--the carbon frame option gives you the light weight of a traditional mountain bike, and the fat tires give you your winter snow-riding ability, so pick the Bucksaw if you want one bike to rip year-round. It's also available in two different build options with an aluminum frame. 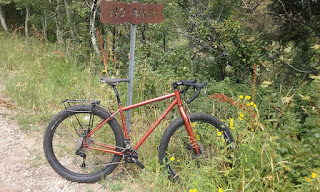 The Deadwood features a steel frame with Boost rear hub spacing, and carbon fork with 100mm thru-axle. As a Fargo fan and new plus-tire fan, of course I was impressed. Rack it up, load it up, and disappear for weeks or months on your favorite road or trail. This will be Salsa's "very limited edition" bike for 2016, so if you want one, give us your money NOW.

Big changes are afoot in Salsa's touring bike lineup for 2016. The Vaya touring bike popular in 2014 and 2015 has moved migrated to becoming less of a pure touring bike and more of a "light touring," gravel-road, adventure bike. Gone are the triple cranksets, in favor of compact doubles. All sizes now have 700C wheels. It will be available in a model with titanium frame, carbon fork, and SRAM X0/X9 2.10 drive train, and two steel frame/fork models, one with SRAM X9/X7 2x10 drive train, and Shimano Sora/Deore 2x9 drive train.
For a true touring bike, Salsa introduces the new Marrakesh bicycles. Featuring triple cranksets, steel frames and forks, Salsa Alternator dropouts for drive train versatility, they will be available in both a drop-handlebar version as well as a flat-handlebar version:
The drop-bar Marrakesh will be available in Green or Black, and the flat-bar version will be available in Blue or Cream. Like the original Vaya, both bikes feature Avid BB7 disc brakes and Schwalbe Marathon Plus tires. The drive train is Shimano Deore 3x10 with Microshift thumb shifters, for durability and easy serviceability on the road less traveled. Most interesting, the Marrakesh bikes will all come with the Salsa Alternator rear rack pre-installed, plus a Brooks B-17 saddle! All sizes will come with 700C wheels, and the frame and fork provide enough clearance for up to a 29x2.0" tire!

I had the opportunity to ride the Marrakesh Flat-Bar:
The stout steel frame feels like it will stand up to harsh roads you'd find anywhere. Even if you're not into long-distance touring, the bike would make a bomb-proof commuter!

On to other fat bike models; the Salsa Mukluk for 2016 will feature the updated trail-like geometry which debuted on the Blackborow for 2015. The Mukluk will be available in two versions, one with a carbon fork and and SRAM X7 2x10 drive train (in two color options, Blue or Yellow), and the other with the RockShox Bluto suspension fork and SRAM GX 1x11 drive train:
I rode the rode the Mukluk suspension model:
I've been trying to resist the Bluto suspension fork, but having now ridden a couple of bikes that have it, it may be an eventual addition to my 2014 Mukluk. The updated geometry felt like it will work well for both aggressive trail riding and loaded expedition touring.

The Salsa Beargrease is the racing-geometry fat bike in the line, and for 2016, it's also the most aggressively priced.
At $1,599.99, the 2016 Salsa Beargrease X5 features an all-aluminum frame and tubeless-ready SunRingle rims.

I also rode a Salsa Warbird Carbon gravel bike:
The Warbird is Salsa's pure racing gravel bike, without any rack or fender mounts or any other bells and whistles. Many people consider gravel bikes to be slightly tweaked cyclocross bikes, but that description really doesn't do them justice. A cyclocross bike is designed to be ridden fast for at most an hour-long race. Gravel races, however, are often hours-long events of up to 200 miles, so the design is much different, with a geometry much more suited to helping you stay comfortable for long days in the saddle. If you haven't tried a gravel bike, you should check one out!

For my favorite, the Salsa Fargo, they went with the "if it ain't broke, don't fix it" philosophy. Thus, the Fargo returns in 2016 with three models, pretty much the same parts specs as the 2015 models, in updated colors:
The all-steel Fargo features a SRAM X7 drive train (Green), the Fargo X9 has a steel frame and Salsa Firestarter carbon fork (Red), and the Fargo Suspension X9 has has the RockShox Reba RL 29 fork (Black).

For you tandem couples out there, look for the Salsa Powderkeg tandem mountain bike:
The sun came out on Tuesday, and the previous day's rain kept the dust down, making for perfect test-ride conditions. This day was Surly day for me, riding some old favorites, and old-but-new-to-me classics. I had my first chance to ride an Ice Cream Truck, the 5-inch tire fat bike with trail-ripping geometry (as opposed to the more expedition-friendly geometry of the Moonlander). It rocks (sorry, no photo).

The Karate Monkey is one of the oldest old classics, but this was my first opportunity to ever take a real test-ride on one. New for 2016 is a complete singlespeed build in Mint:

Still rippin' it since its introduction in 2013 is the Straggler, aka "disc brake Cross-Check:"

Likewise for the original 29+ bike, the Krampus:
And the object of my epic 2013 ride, the ECR all-terrain touring 29+ bike:
Surly did not have any brand new bike models to show off, but they tell me that they'll be introducing a new model soon, but not details will be released until the EuroBike trade show in late August. Based on some experiments I've seen on their blog, my guess (and this is COMPLETELY a guess) is that it'll be a fat-tire cargo bike, a Big Fat Dummy perhaps?

An often overlooked brand, another of Surly and Salsa's sister brands, is Cogburn, who make a fat bike targeted at the fin-fur-and-feather set (it's often shown with a gun rack mounted on the rear). The Cogburn CB4 fat bike comes in cool camo color schemes. With only two sizes, a SM/MD and LG/XL, it's got a very upright geometry, making it feel like "your papa's fat bike." However, on my test-ride, I found it can still rip the trails with the best of them.
So, you're asking, "what was your favorite?" As a Fargo owner, I was partial to the Deadwood. I felt the most confident riding the trail on the Pony Rustler.

What can you expect to see in our stores? We'll continue to satisfy our bike-touring customers with the Marrakesh Drop-bar and the Vaya Deore. Look for the Beargrease X5 to be our bread-and-butter fat bike. We'll have a complement of Fargos, maybe a Cutthroat and a Beargrease Carbon, and may another Blackborow like this past year!
Posted by Kevin Madzia at 8:00 AM