Our first bicycle touring visitor of the 2015 season 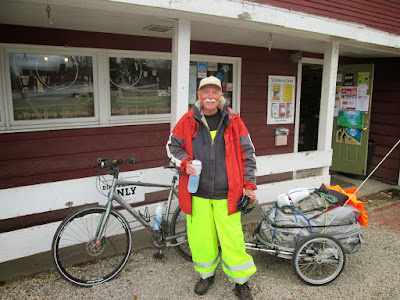 Everett Finn stopped by the Century Cycles store in Peninusla on Thurday, April 23, 2015. He left from Omaha, Nebraska three weeks earlier. He braved the cold temperatures of the day, not to mention the narrow winding road of State Route 303 from Brunswick. He's headed to New York state to meet his nephew, where they'll ride together on the Erie Canalway Trail.

You can view more pictures of long-distance touring cyclists who have visited all three of our stores in our Bicycle Touring Photo Gallery.