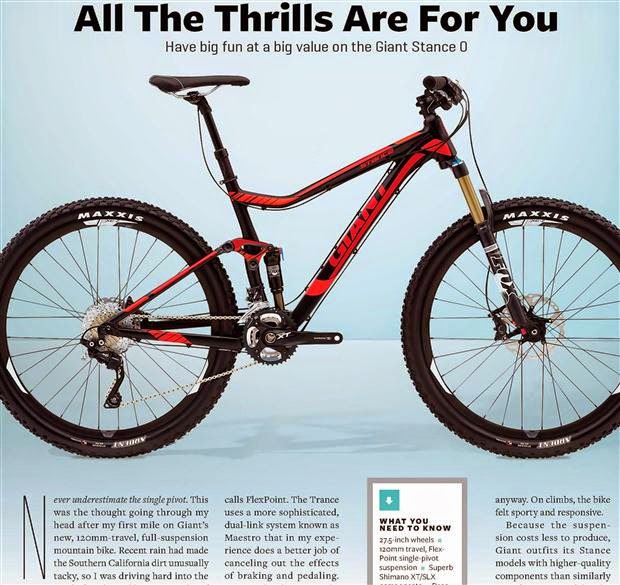 Bicycling Magazine reviewed the 2015 Giant Stance 27.5 0 mountain bike in its May issue, praising its FlexPoint suspension system and mix of high-quality components including a Giant dropper seatpost.

As for the ride performance of the Stance 27.5 0, which features 120mm of suspension travel front and rear, Bicycling test editor Ron Koch wrote: “At one point, I literally had to clean the dirt off my teeth because my grin was so big.”

Detailing some of the bike’s features, Koch wrote, “The standout feature is the Giant Contact SL Switch-R dropper seatpost—a $280 upgrade if purchased separately. You don’t often find a dropper post in this price range—and it’s a significant benefit. No other innovation in the last 10 years has done more to change the way I ride.”

The dropper seatpost is an innovation on mountain bikes, allowing you to change the seat height on-the-fly using a handlebar-mounted remote control lever. Keep it at you maximum height for efficiency while climbing, then drop it out of the way for aggressive descents!

The FlexPoint suspension system is not as advanced as Giant's Maestro suspension system, but that allowed Giant to spec higher-quality parts that you normally wouldn't find on a bike at this price point, including a Fox fork and rear shock, Shimano SLX shifters, front derailer, and hydraulic disc brakes, and Shimano XT rear derailer and crankset.

To read the full review of the new Giant Stance 27.5 0, pick up the May issue of Bicycling Magazine, out on newsstands now. Stop into the Century Cycles store in Medina for a test ride, because we've got this bike in stock!
Posted by Century Cycles at 10:29 AM