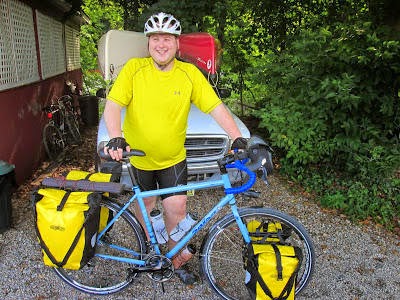 Chris Shaffer is a full-time sales associate at the Century Cycles store in Peninsula. He has worked at several other retail stores that carry bicycles and other outdoor gear, and has led backpacking, canoe, and kayak trips.

Chris purchased his 2014 Salsa Vaya 2 bicycle not long after he started working for Century Cycles at the beginning of the 2014 season.

Q. Why did you choose the Salsa Vaya 2?

A. I wanted a touring bike, and I like the idea of a steel bicycle frame for its durability and comfort. I wanted disc brakes because I'm a big guy, so I figured the extra stopping power won't hurt. I like the integrated brake/shift levers that the Shimano 105 drive train provides. A bonus was that I was able to get matching Salsa cargo racks.

Q. What other additions have you made to the bike?

A. I upgraded the handlebar tape to Lizard Skins as soon as I got it, swapped on a Terry saddle, and added three water bottle cages, and Planet Bike Cascadia full-coverage fenders. I use Ortlieb touring panniers, plus a waterproof Ortlieb handlebar bag and seat bag.

Q. Do you have any other upgrades planned?

A. I need a new headlight, and I'm thinking about a Brooks saddle.

Q. What bike-touring trips have you taken on it so far?

A. I did six bike tours in 2014. Four of them were Sub 24-Hour Overnights, one was a three-day trip from Peninsula to New Philadelphia and back, and another was one of my bucket list trips, the Great Allegheny Passage/C&O Canal Trail from Pittsburgh, PA to Washington, DC.

Q. What is the longest single-day ride you've done on the bike?

A. 89 miles, which was part of the New Philly trip. I hope to do a century some time this year.

Q. What touring plans do you have coming up?

A. Nothing set in stone yet, but I hope to do part or all of the Ohio to Erie Trail, and commute to work by bike more often.

Q. Any final thoughts on the bike?

A. I have not been disappointed with my choice. The Salsa Vaya is a comfortable, durable bike that handles heavy, heavy loads very, very well.
Posted by Century Cycles at 2:52 PM