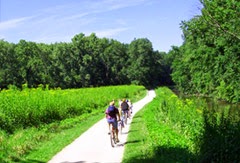 The Ohio & Erie Canal Towpath Trail, while still not complete itself, is being seen as one of the key links in a four-state mega-trail network, linking existing and planned trails in Ohio, West Virginia, Pennsylvania, and Maryland.

The initiative is a project of a group known as the Power of 32+, named for the 32 counties originally encompassed in the target region.

Read more about the plan, and the other local trails that hope to be a part of it, in this article from the Akron Beacon Journal.
Posted by Century Cycles at 7:00 AM

Email ThisBlogThis!Share to TwitterShare to FacebookShare to Pinterest
Labels: Power of 32+, Towpath Trail