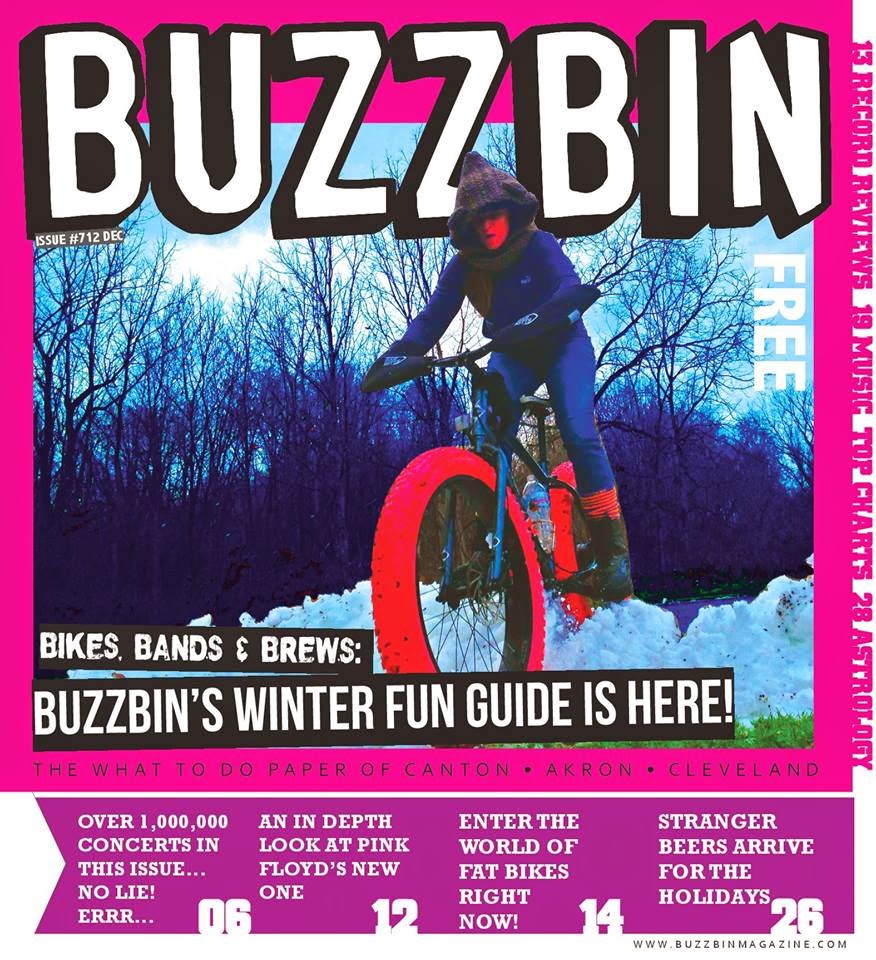 Mike Nasvadi is the editor-in-chief of Buzzbin Magazine, a sometimes-monthly arts/music/entertainment newspaper serving Northeast Ohio, with a focus on their home in downtown Canton. He's also the proprietor of Buzzbin Art & Music Shop, the companion shop/bar/venue.

Mike is also a huge fan of fat bikes and snow biking. Recently he mentioned on the Fat Bikes group on Facebook that he was working on an article on fat bikes for his magazine, and asked other users to submit photos of their fat bikes. Mike was inundated with an avalanche of fat bike pictures that continues to this day!

I dropped Mike a note with a couple of my favorite fat bike photos, and he got back to me to ask if I'd answer a few questions to help out with his article. I was happy to oblige.

Yesterday, I drove a few counties south to visit some family, and on the way home last night as I passed through Canton, it occurred to me that I should stop in and check out the Buzzbin shop, and maybe even grab the latest issue of the magazine to check out the fat bike article.

The Buzzbin shop has a wide selection of beers in both bottles/cans, and on 11 taps (including 3 nitro taps), with an ever-changing selection of craft micro-brews, plus your old favorite macro-brews like PBR and the like. I asked for a list of the drafts, and the friendly bartender Christina told me that they don't have one, but that's okay; she was able to rattle off the list from memory. That's a good sign at a draft bar; that shows they know their stuff and aren't just slinging tap handles. I settled on the Breckenridge Brewery Vanilla Porter Nitro, and I wasn't disappointed.

I looked down to the end of the bar, and there was Mike himself, chatting with his fellow fat-biking buddies Nate and Danny. I introduced myself to Mike and he introduced me to his friends as the "local celebrity from the magazine."

I opened up the magazine, and lo and behold, there I was, with my answers to Mike's questions printed verbatim, and myself billed as the local "fat bike expert," right alongside world-renowned fat biking expert Greg Smith of fat-bike.com. Well, shucks! I had a swell time chatting with Mike, Nate, and Danny about our fat bikes, our favorite places to ride, other cycling adventures, how to expand the growing fat biking and downtown Canton cycling scene, and going over the Slavic origins of our last names with Christina.

Thanks to Mike and Buzzbin Magazine for a cool article. You can read my contribution to the article here. Check out the Buzzbin Magazine at www.buzzbinmagazine.com, the shop at www.buzzbinshop.com, and you can find their current beer menu here. It's worth a trip to downtown Canton to check out the shop, even if you're not in the area for another reason like I was! In addition to their awesome beer selection, they've got live music events, new beer and brewery launch celebrations, games, and more! The Downtown Canton Bike Club meets there every Sunday, with casual beginner-friendly rides (in-season).
Posted by Kevin Madzia at 12:59 PM