Why you need a Salsa Fargo bike

I have mentioned my Salsa Fargo bicycle on this blog before, but I wanted to take some time out to tell you about why it's my favorite bike, and what makes it such a great bike.
When people see these bikes sitting on our sales floor, the reaction is often as confused as when people see our snow bikes. "What is THAT?" The Fargo is an unusual-looking bike; the drop handlebars make it look like a road bike, but the fat 29er tires are clearly made for mountain biking.

Salsa Cycles describes the Fargo as "a drop-bar mountain bike designed for off-road touring." That drop handlebar they're referring to is their own model, called the Woodchipper. It's got a wide flared-out shape that gives you a more comfortable position for your wrists and better leverage and control when riding off-road.

When we say off-road touring, we're talking touring in the sense of loading up your camping and cooking gear and heading out for an overnight trip, or a week, or even a few months. The design of the Fargo was inspired by the Tour Divide, the unsupported ultra-endurance race held every June on the Great Divide Mountain Bike Route. At the start of the 2013 Tour Divide event, 10 percent of the field was aboard a Fargo. Salsa-sponsored racer Jay Petervary holds the Tour Divide record, which he set on a Fargo Ti.

But the Fargo is not just a mountain bike, and not just a touring bike. For me, the Fargo is a true "hybrid" bike, and I don't mean "hybrid" in the "grandpa bike" sense of the word like you'd usually think, but hybrid in that it can do anything, and do it well with very few compromises. I wouldn't want to have only one bike, but if I had to limit my collection to just one, it would be the Fargo. I've used my Fargo in every cycling situation you can imagine, and it has excelled in every one.


Commuting
The Fargo has all the mounts and fittings to accept full front and rear racks and fenders, so it's easy to carry as much or as little as you need for your daily commute. Put a pair of skinny road tires on the wheels if you've got mostly smooth pavement to cover, or fat slick tires like the Serfas Drifter 29er to give you a good balance of smooth rolling and pothole-eating girth.

On-road Touring
Even though the Fargo is made for off-road touring, there's no reason it wouldn't work great for on-road touring as well. Put some smooth tires on it, choose the tire width based on the road conditions, and load 'er up and go. Add front and rear cargo racks if you want to carry your stuff in standard panniers. The Planet Bike Cascadia 29er Fenders fit great. Click here for a more detailed account of my first on-road tour with the Fargo.

Notes about cargo racks
The original versions of the Fargo supported any standard front and rear racks. The latest versions use Salsa's alternator dropouts on the rear, which allow you to convert the bike to a singlespeed. The drawback is that you must now use the special Salsa Alternator rack. Up front, the current Fargo 3 has a steel fork, which supports most standard front racks, or you can use Salsa's Anything Cages to strap storage bags on to carry your stuff. The current Fargo 2 and Fargo Ti use a carbon fork, so Anything Cages are your only option on the front.

Mountain Biking
The Fargo is, at heart, a mountain bike, so it goes without saying that it does well on mountain bike trails. My first ride with the Fargo on singletrack was at Quail Hollow State Park, where I did a head-to-head comparison between the Fargo and my full-suspension mountain bike. Later, I took it to Ohio's favorite mountain bike trail, Mohican State Park. Click here to read more about both of these first test-rides. It was also worthy of a few mountain bike races, including the 2012 Iceman Cometh Challenge.
Of course, riding a fully-rigid bike (without suspension) on a mountain bike trail takes some getting used to, and it does beat you up a bit. My Fargo frame is compatible with a suspension fork with 80mm of travel; the 2014 and new models are compatible with 100mm suspension forks. For 2015, Salsa will offer the Fargo 2 Suspension, which will come equipped with a RockShox fork.

During 2013, I swapped some parts around on my Fargo, adding a suspension fork and a flat handlebar to make it a more "traditional" hardtail mountain bike. Read more here about my experiences with this setup, and how I converted it back to its original setup at the beginning of this year.
Off-road Touring (Bike-packing)
Bike-packing is a new style of bicycle touring, using lightweight frame bags and oversize seat bags. This setup saves weight compared to racks and panniers. Typically, you'll have to use a backpack to have enough room for all the gear you need for a multi-day tour. You have to choose smaller and lighter-weight items as well. Some people choose a lightweight bivy sack instead of a tent, or even just a ground cloth and overhead tarp, if you're not too worried about getting eaten alive by bugs. Here's a shot of my Fargo packed up with gear for my first bike-packing overnight trip:

Click here to read a detailed list of all the gear. Click here and here for details of a multi-day trip I did on the High Country Pathway, an 80-mile off-road loop in northern Michigan.

Road Biking
So, the Fargo sort of looks like a road bike, but how does it ride as a road bike? Just fine! Click here for details of a head-to-head comparison I did of my Fargo versus my regular road bike, which is about 7 pounds lighter. Long story short, the Fargo was a tad slower, but for the average person of average fitness, not enough to worry about.
Cyclocross
Got the urge to suffer for 45 minutes with your heart rate pegged while you pedal around a dirt track and jump barriers? No need to buy another bike if you've got a Salsa Fargo; it handled the Wooster CX race in late 2012 for me just fine! 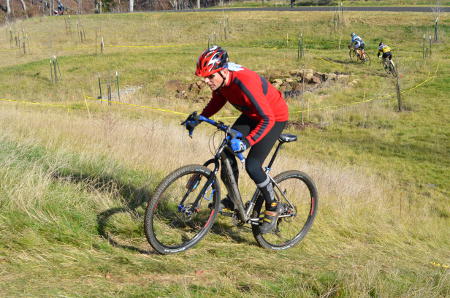 Gravel Grinders
The gravel grinder race is a phenomenon started in the upper Midwest and is sweeping the nation. Held on little traveled back country roads, most people choose a traditional cyclocross bike. Gravel-specific bikes have been popping up the past couple of years from all of the major bike manufacturers. The Fargo had it covered for me at the inaugural Amish Country Roubaix in April of 2013!
Earlier this year, I took a solo ride on the Montville Mudder, a 42-mile route on mostly gravel roads mapped out by members of the Cleveland Touring Club.

In conclusion, although it's usually the case that you can't buy one bicycle to handle every type of riding you might do, the Salsa Fargo is the exception that proves the rule. From the roads to the mountains, bike trails to the 'cross course, the Fargo is your true do-it-all Swiss Army Knife of bicycles.

Currently, we have the Salsa Fargo 3 in stock in a size Medium, and the Salsa Fargo 2 in stock in Medium and Large. Stop in for a test-ride! Call your nearest Century Cycles store to verify availability (we can transfer bikes to the store nearest you at no additional cost or obligation).
Posted by Kevin Madzia at 7:00 AM