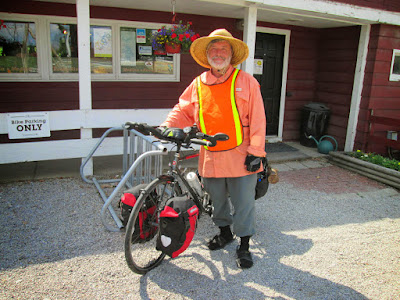 Mike Scully is riding from his home in San Antonio, Texas to visit friends in Albany, New York, and stopped by the Century Cycles store in Peninsula for some new brake pads. The theme of his trip is "Nothing Hard is Ever Easy."

Mike said that the worst part of his whole trip was the most recent 10 miles, on State Route 303 from Brunswick to Peninsula! The best part, however, was also very recently, when a group of Amish let him draft off of their horse and buggy.

Mike is writing about his trip on a discussion web site called "24 Hour Campfire." He was reluctant to tell us about it at first, because, as he put it, "It's a hunting and fishing oriented web site, and I've found that many cycling types don't take that too well." That's all well and good for us, Mike! The address of his discussion thread (where he is known as "Birdwatcher") is:

He said, however, that being on that web site has exposed the idea of bicycling to a whole new audience. He's had a lot of questions and interest from his online friends, and hopes to inspire many of them (as well as many of the students at the high school where he teaches) to embark on a bicycle adventure of their own.

You can see more pictures of long-distance cyclists who have visited all three of our stores in our Bicycle Touring Photo Gallery.
Posted by Century Cycles at 7:00 AM