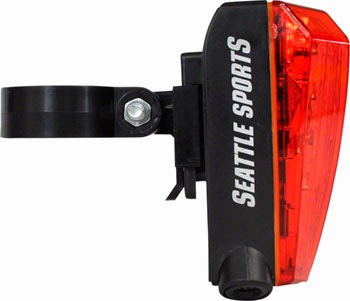 Prototype versions of this concept has been bouncing around various crowd-funding sites the past couple of years, but they are finally available as a regular product.

The Seattle Sports Lazer Lane Taillight uses 2 red lasers to project a virtual bike lane onto the road beside you. It also has a set of regular LED lamps to function as a standard taillight.

I tried this light out on my ride home from work last week. First, I had to install the two AAA batteries (included). You have to use a small jeweler's screwdriver to remove the battery cover, which can be a bit of a pain, but the good thing is that you don't have to worry about it popping off when you ride over a bump, which has happened to me with other taillights. When you put the battery cover back on, you have to be very careful to get the rubber grommet back in place in the groove around the edge of the light, but this piece does help the light keep the weather out.

Mounting on my seatpost was pretty easy using the supplied clamp. If you have a rear cargo rack and a trunk bag on your bike, the bag will block the taillight. A rack-mounting option would make this light a little more versatile. My seat bag and Bike Glow light battery pack also made the whole setup a little more crowded, as you can see: 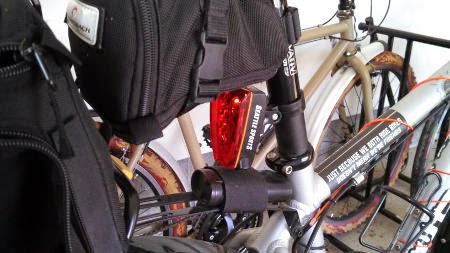 I think this light would work best for the typical urban cyclist who carries most of their stuff in a backpack or messenger bag and doesn't have a lot of stuff on their bike. The drop-down side panniers on my Topeak MTX EXP Trunk Bag blocked the lasers a bit. I moved most of my stuff to the right-side pannier so I could fold up the left-side (traffic side) pannier to give the laser more room. 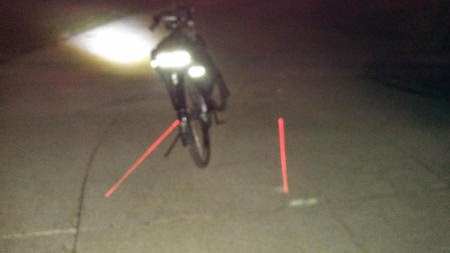 I usually have pretty good luck co-existing with cars on my ride to and from the shop, so it's hard to say how much the Lazer Lane Taillight helped. But, it functions as it should, and would be a good addition to the bike commuting gear of any urban (or suburban) cyclist. The run time of the batteries varies with whether you're using the lasers, the LED, or both, and whether you're using them in steady, strobe, or flashing modes. See the Lazer Lane Taillight product page on our web site for details.
Posted by Kevin Madzia at 11:09 AM