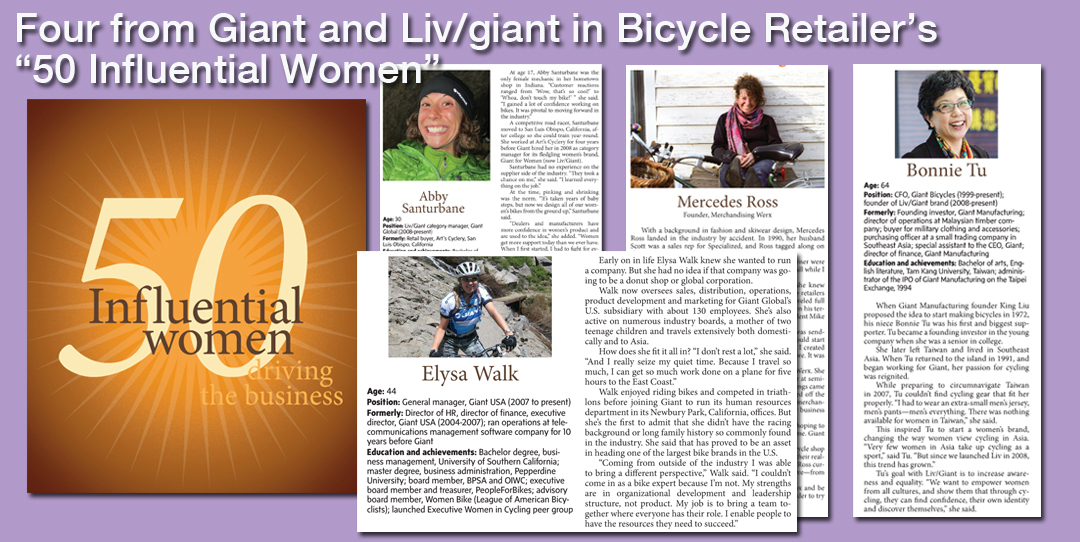 Bicycle Retailer and Industry News magazine has published a special section on the "50 Influential Women Driving the Business" and four individuals from the Giant and Liv/giant brands are featured. Listed in the section are:

Bonnie Tu, CFO of Giant Bicycles and founder of the Liv/giant brand

Mercedes Ross, founder of Merchandising Werx and a consultant to both Giant and Liv/giant.

The editors of the magazine describe how they chose the select group: "As we embarked on this project, we set out to find women at the forefront and behind the scenes who are influencing how the industry markets and sells bicycles and who are growing cycling's reach."  Bicycle Retailer and Industry News is the leading business publication for the cycling industry.

Also featured in the section is Giant Account Executive Sophie Eaton in a sidebar story about the strides women have made in the bike industry over time.  Sophie has witnessed many changes in the bicycle business during her 30-year career in sales.  She says, "It's much more positive than it was 15 to 20 years ago. It's more friendly and there are more women than ever working in our industry. There are still invisible walls, but we're breaking them down."

You can read more about the featured women in a digital copy of the entire "50 Influential Women" section by clicking here.
Posted by Century Cycles at 6:00 AM