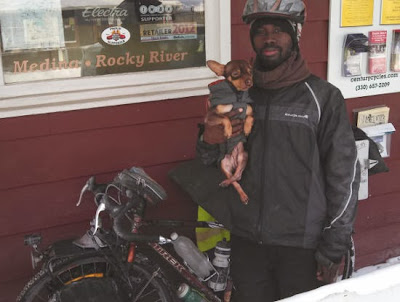 Okay, you can just give up now, because we've met the world's toughest (and maybe craziest?) touring cyclist you will ever find. This unlikely pair stopped by the Century Cycles store in Peninsula yesterday, riding through our latest cold snap that brought temperatures in the single digits and lower.

Wilson and his Chihuahua Polo hail from Washington, DC. Wilson said that back in 2011, he got tired of sitting at a desk all day, and decided to spend his life riding his bike around the country. He's ridden over 60,000 miles since then, and has crossed the country six times. He makes a living doing odd jobs at places he stops from time to time.

Currently, he's riding the Adventure Cycling Association's Underground Railroad Bicycle Route, going south. He rode from Buffalo, NY to Erie, PA a few days ago, then rode from Erie to Geneva-on-the-Lake on Sunday, then made his way down to Peninsula yesterday. Fortunately, he found a kind soul from the Akron Bike Club to hunker down with and warm up for a couple of days.

You can see more photos of touring cyclists that have visited all three of our stores (usually in much more pleasant weather) in our Bicycle Touring Photo Gallery.