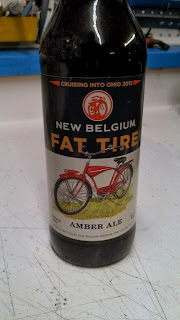 This may be old news to beer aficionados by now, but as of last week, select beers from New Belgium Brewing Company are now available here in Ohio for the first time. In addition to making some darn fine adult beverages, New Belgium is known throughout the land as one of the most bicycle-friendly businesses, not just in the beer industry, but among all businesses.

Based in the bike-crazy town of Fort Collins, Colorado, New Belgium sponsors the Tour de Fat in locations around the country. It's a festival of bicycles and beer, as well as a fund-raiser for various local charities in the events' host communities. The classic cruiser bike symbol is used in their company logo, as well as on their signature Fat Tire Amber Ale. 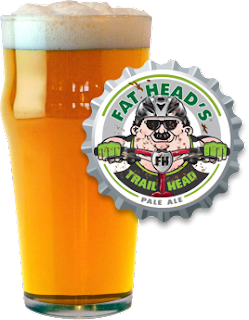 You don't have to go all the way out west to find a local bike-friendly brew, though. Our own Fat Head's Brewery & Saloon right here in North Olmstead, Ohio serves up an ever-changing menu of food and awarding-winning beers brewed right on the premises. One of their most recent additions is the Trail Head Pale Ale, and a portion of the proceeds of every one of these that you drink supports the Cleveland Metroparks Trails Fund, which helps maintain the Royalview Mountain Bike Trail and the other 270 miles of trails in the Cleveland Metroparks.

Of course, many other Cleveland-area breweries and bars (e.g. Nano Brew and Great Lakes Brewing Company) do their part to support bicycling, through providing bike parking, encouraging their employees to bike to work, providing a bike-friendly atmosphere, and other practices that promote overall sustainability.

Know of any other local businesses that make an effort to reach out and support bicycling? Let us know in the comments below!
Posted by Century Cycles at 1:02 PM