While Saint Nicholas may bring gifts to good boys and girls, ancient folklore in Europe's Alpine region also tells of Krampus, a frightening beast-like creature who emerges during the Yule season, looking for naughty children to drag back to his lair in a sack and punish in horrible ways.
Since pre-Germanic Pagan times through today, men dressed as these demons have been frightening children on Krampusnacht for centuries, chasing them and hitting them with sticks, on an (often alcohol-fueled) run through the dark streets. See more photos at The Atlantic. 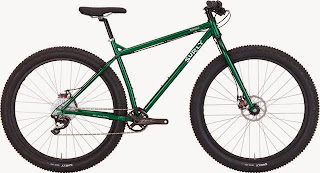 In keeping with that tradition, Surly Bikes brings you the Krampus. What exactly is the Krampus? Its big 29x3-inch tires make it look like a snow bike, but it's technically not, although it would certainly do better in the snow than your daddy's mountain bike.

The Krampus is a mountain bike made to be ridden hard and put away wet. The fat Surly Knard tires roll over the rough stuff even better than a typical 29er. The Shimano 1x10 drive train keeps things light and simple. The Avid BB7 disc brakes stop you when you want. Of course, Surly's 4130 cromoly frame and fork take the abuse and feel smooth under your delicate sensibilities. In stock now at Century Cycles in Small, Medium, and Large.
Posted by Century Cycles at 2:56 PM