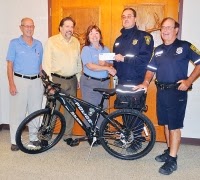 Thanks to a $750 grant from the Lakewood Elks lodge, the Westlake Police Department recently added a bicycle to the fleet of over a dozen bikes used for their bicycle patrol.

The bike is a Raleigh Talus 4.0 mountain bike purchased from the Century Cycles store in Rocky River.

You can read more about the grant and the Westlake PD bike patrol in this article from the Westlake Bay Village Observer.

Police departments in Northeast Ohio and all over the country have discovered the benefits of using bike patrols, from both a community relations and a law enforcement standpoint. According to Westlake PD Lt. Ray Arcuri:

"When a call came in about shoplifters at Giant Eagle ... the responding patrol car was stuck at the stoplight at the Detroit-Bradley intersection. A bike officer, bypassing the traffic, made it through the intersection first and arrived on the scene just in time to catch the fleeing suspects."

Century Cycles has been working with several other police departments over the years to help outfit their bicycle patrols, including the cities of Akron, Brooklyn, Brunswick, the Village of Gloria Glens, the Metro Parks Serving Summit County police, and the Cleveland Clinic Police Department.

If you're in law enforcement and would like to discuss your bike patrol needs, please contact us!
Posted by Century Cycles at 1:20 PM