A look back at bicycling's past with National Geographic Magazine

The May 1973 issue of National Geographic Magazine featured not one, but two extensive articles about bicycling. 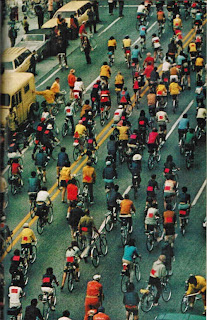 The first article, "Bicycles Are Back - and Booming!" was about the 1970's bike boom that was just hitting full steam at this time, when most of us were getting our first "10-speed" bikes, as they were known. It even hearkens back to the turn of the century, when the League of American Wheelmen (now the League of American Bicyclists) successfully lobbied for the first widespread paving of road systems. It goes on to discuss the beginnings of the bike-vs.-car controversy, and recalls how the state of Oregon became the first to mandate a percentage of transportation funds be devoted to bicycle infrastructure (which led, of course, to the state being one of the most bike-friendly in the nation today). Of particular local interest is a full-page photo (above) of a crowd of cyclists on the streets of Columbus, Ohio during the Tour of the Scioto River Valley (TOSRV), at that time already boasting over 2,000 registered riders.

Images of the entire article can be viewed here:

Click here if the slideshow above is not appearing for you.

Immediately after the first article is "Bikepacking Across Alaska and Canada," which chronicles the first leg of Hemistour, a bicycle trip from Alaska to the southern tip of South America. The first leg of the trip follows Dan and Lys Burden and Greg and June Siple as they ride from Alaska back to their home in Missoula, Montana. Not coincidentally, Greg Siple was one of the co-founders of TOSRV. Although not the first cross-continent bicycle tour, Hemistour started the modern bicycle touring movement, and the participants used their experience to plan Bikecentennial, a US cross-country bike tour taken in 1976 to honor our nation's 200th (bicentennial) anniversary. The organization that started as Bikecentennial was eventually renamed to Adventure Cycling Association, and that group has been the premier non-profit that supports bicycle travel through their research and creation of route maps, working with governments at all levels to promote bicycle travel and tourism, and offering the world a treasure trove of other bike touring resources. 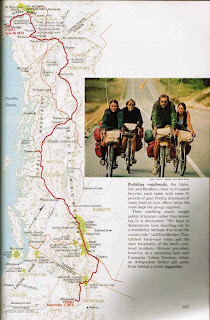 Images of the entire article can be viewed here:

Click here if the slideshow above is not appearing for you.

It was later in 1973 that a 12-year-old Scott Cowan happened to be perusing his father's latest magazines, and the above article caught his eye. "What a great idea; taking a vacation on your bike," the young Scott thought to himself. (The photo of a young female cyclist taking a refreshing nude dip in a mountain stream probably didn't hurt.) That led to a lifelong fascination with bike touring and all things bicycling, including the founding of Century Cycles. The rest, as they say, is history.

Posted by Century Cycles at 7:00 AM