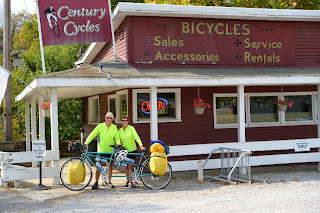 Hob and Deb McConville from Vernon, CT stopped by the Century Cycles store in Peninsula on Oct. 2. They have ridden from their home through Montreal, Northern Ontario, then south on the Underground Railroad Bicycle Route, which they'll take all the way to Mobile, Alabama, eventually ending their trip in New Orleans.

That's no ordinary tandem they're on. It's 33 years old, and was only the 22nd bicycle produced by Santana. The bike (and the couple) are famous among bike touring and tandem aficionados; they've ridden it over 105,000 miles across four continents! 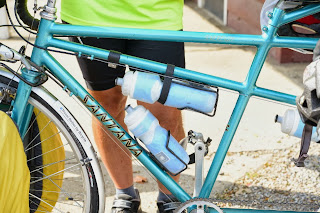 You and your partner can test-ride your own tandem bike at our authorized Santana Test-Ride Center in our Medina store! 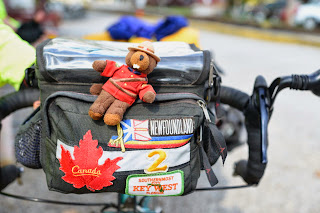 You can see more photos of long-distance cyclists that have visited all three of our stores in our Bicycle Touring Photo Gallery.
Posted by Century Cycles at 8:00 AM