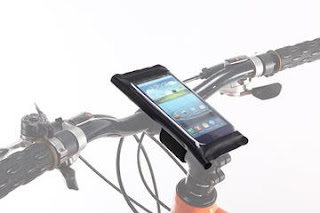 Two summers ago, I wrote about my search for the perfect smartphone holder, which included the BiKase Handy Andy. The new DriKase from BiKase is the younger, smarter brother of the Handy Andy. I picked one of these up a few months ago, and have been giving it a good workout on my daily bike commute, as well as on longer rides both on- and off-road.

The design of the DriKase in ingeniously simple. It's got a velcro roll-up closure on one side of the waterproof urethane and nylon case, and a large velcro strap on the back. The clear cover is touch-screen compatible, and there's a clear panel on the back as well, so you can use your camera with the phone in the case.

Wrap the velcro strap around your stem (as shown above) to view your phone in portrait mode, or wrap it around your handlebar to view your phone in landscape mode. If you've got already got a computer, headlight, bell, or other accessories on your handlebar or stem, it might get a little crowded, but that's going to happen with any smartphone case.

The velcro strap is easily removable, so if you don't need to see your phone while you're riding, you can still get the waterproof protection of the case, and stuff it in your jersey pocket, handlebar bag, or pannier.

As a general-purpose case, it won't become obsolete as you upgrade your smartphone. It fits most of the latest models, including iPhones, Droids, and Windows phones, although it won't fit some of the newer, larger models of phones, such as the Samsung Galaxy S III. There's a separate padded insert inside the case, which helps to take up some of the space when used with an extra-slim phone, and also provides some shock absorption. The insert also has a small pocket, which can serve as a wallet for an ID, credit card, and small stash of cash.

I give the BiKase DriKase two thumbs up, but if you want a second opinion, the gang at UrbanVelo did their own test, which you can read about here. Reviewer "Urban Jeff" said that "the DRiKASE held my phone safely and securely, even on rough city streets" and "I imagine it would take a storm of biblical proportion for rain to get inside."

At $29.99, the BiKase DriKase is a bargain at any price, and now in stock at all three Century Cycles stores.
Posted by Kevin Madzia at 8:00 AM