Kyle Brooks lives in Akron with his wife and two daughters, and works as a teacher in Medina. He has a collection of bikes, mostly vintage or classic styled steel road bikes, and even keeps a couple of bikes on display in his classroom. His favorite bike shop is the Century Cycles store in Peninsula, though the new Medina store is super nice.

Kyle previously wrote articles for our blog, his thoughts and products reviews of the Pearl Izumi Elite Barrier Convertible Jacket, Pearl Izumi Select Thermal Long Sleeve Jersey, Pearl Izumi Amfib Tights, and NiteRider headlights and taillights. In his latest guest blog, he shares his experiences after one full year of commuting to work by bike. 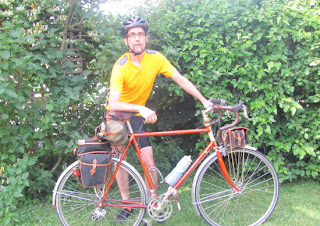 Having just wrapped up a year of commuting to work by bike, I have some observations to share. I work as a teacher in Medina County, but I live in Akron, with a commute of roughly 14 miles each way. I first tried commuting by bike in May, 2012. I had wanted to ride to work for a long time, but I just felt like there were too many “obstacles” preventing me from doing it. I was concerned that I didn’t have a safe route to work. I was concerned about the fact that I need to dress pretty professionally for work. I was concerned about needing to shower, etc., after riding that distance. As it turned out, the biggest obstacle was mental. Once I determined that I was going to try it, the other obstacles either didn’t materialize, or were handled pretty easily.

The route to work was the first thing that needed to be planned. The shortest, most direct route between Akron and Medina is State Route 18, which is also the main thoroughfare between the two cities. Other less-traveled routes would add more distance, more hills, and more time. Another thing I considered was the fact that the back roads, while less traveled, are also less well-lit, and have many blind spots where cyclists can “disappear” between hills and around bends. These can be concerns at any time, but can be even more hazardous in the dark early morning hours. In the end, I decided to take the most direct route in the morning. At the early hour when I leave, I find Rt.18 actually has very little traffic. I also felt that, should I have a mechanical problem or even just a flat tire, I’d have no problem finding a good, well-lit place to fix it. The interchange at Interstate 77 is a bit dodgy, with a fair amount of traffic exiting the freeway, but it’s manageable, and only a small part of my commute. In the afternoon for the ride home, the traffic on Rt. 18 is much heavier, so I take one of the back road routes. The extra distance isn’t a problem since I’m not quite as pressed for time.

As far as clothing goes, I wear bike-specific clothing for the ride, and change when I get to work. Rather than pack professional work wear with me each morning and take it home each night, I keep a couple of suits, a pair of dress shoes, and some ties at work, and I take in a few days worth of clean shirts, socks, etc. on the days that I do drive. By keeping a couple days’ worth of clothes at work, I have one less thing to worry about as I prepare to ride in the morning, and I’m spared the embarrassment of showing up to work one day having forgotten to pack something important (Oh my God, I forgot to bring pants!!!). Good technical bike wear is a must for a commute of the distance that I ride, and over the course of the year, I’ve added a lot to my cycling-specific wardrobe.

Although I worried about needing a shower after my ride, that turned out not to be a concern. Of course, teaching at a public high school, we do have locker rooms and showers available – a luxury not everyone has at work. In practice, though, it hasn’t really been necessary. I do keep a towel or two and the necessary shower supplies at work, but I’ve found that it’s usually so cool in the mornings, even in June, that I don’t really need a shower when I arrive. Now, I couldn’t say it would be the same situation on a hot, humid morning in July, but normally whatever cleaning up I need to do when I get to work can be done in a regular bathroom sink with a washcloth. Once I’ve changed into clean clothes, nobody has any idea that I’ve ridden my bike to work, and no, I don’t think people are just being polite.

After my successful bike commuting experiment last May, I started riding regularly when the new school year started last August – weather permitting. I didn’t relish the idea of riding in the rain, so I drove when it was either raining or the chance of rain was more than likely. People asked me how long I thought I could keep it up. Honestly, I didn’t know. I figured I’d be good until maybe October, or as long as the morning temperatures were above 40 degrees. But really, I had no idea what my limits might be. Every time I thought I might be nearing my limit, the next thing I’d know, I’d gone beyond that limit and had to set a new one. October came and went, and I was still riding. Forty degrees came and went, and I was still riding. Before I knew it, it was November, then December, with morning temps in the 30s. I bought some thicker tights, better gloves, and a warmer jacket, and temps in the 20s became possible. In the spring, I even invested in some decent rain wear, and then even a threat of showers didn’t really put me off so much.

By the end of the school year in June, I had managed to keep a year-long biketo-work average of 50%, which had been my goal. It had actually been higher in January, but then February and March were horrible months to ride, with singledigit night-time temperatures and lots of sleet or freezing rain. Looking only at the last two months of the school year, though, my average was nearly 75%.

Here are some other figures that wrapped up my year:

In addition to all that, I also lost 15 lbs., though that was more or less accidental. I wasn’t trying to lose weight. Of course, now I need to get my suits altered. That money I saved on fuel has to go somewhere, right?

In the end, I think biking to work this past year was a good experience. I know there are probably a lot of other cyclists out there who have thought about biking to work but maybe have talked themselves out of it for the same reasons that held me back for so long. I really hope that this helps those people see that it’s worth giving it a try.
Posted by Century Cycles at 9:00 AM