A Tour of the Peninsula Basement 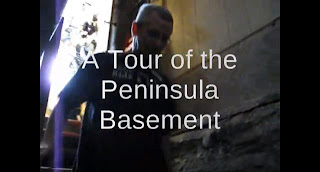 At the Century Cycles store in Peninsula, when we tell customers that we're going to get them a bike from the basement, often their first thought is, "You have a basement?" Yes, indeed, in tiny humble little Peninsula, there is a basement. It's not a very friendly place, though, and you wouldn't want to follow us down there.

What's it like in Peninsula's basement? For the first time ever, we're giving you an exclusive inside look! Join Kevin on this tour of the Peninsula basement in all its moldy glory:

Produced, written, and directed by Kevin. Cinematography by Jackie.
Posted by Century Cycles at 5:39 PM