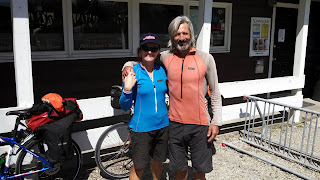 The Peninsula store was greeted by our first bicycle-touring visitors of the season today. Linda (left) and Jose (right) are from Bunbury in Western Australia. Jose started his ride in Los Angeles on March 1, and rode the Southern Tier Route to New Orleans, where he met his wife Linda. The couple rode the Great Rivers South Route and the Underground Railroad Route to Ohio, and are continuing to Niagara Falls. From there, they'll ride down to Pittsburgh, and follow the Great Allegheny Passage and C&O Canal Towpath Trail to Washington, DC. Linda will fly back home to Australia from there, but Jose is flying to France, where he'll meet a friend in Nice and pedal through Europe, up to and including Norway. He expects to be back home by Christmas of this year!

Jose was especially proud of his bicycle, a 28-year-old chromoly framed-touring bike handmade in Australia: 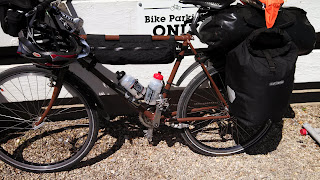 Back in 2012, Jose and Linda were riding across the US on the TransAmerica Trail Route, and met an Ohioan in Wyoming, a local rider named Michael from Northfield. The group crossed paths today, and planned to ride for together for a while as Jose and Linda made their way up to Burton for the evening. 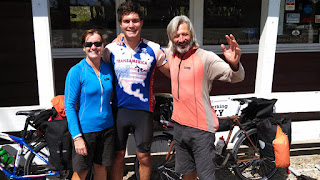 You can see more photos of long-distance cyclists who have visited all three of our stores in our Bicycle Touring Photo Gallery.
Posted by Century Cycles at 1:36 PM