Get ready to ride at free Bike Fairs in Bay, Rocky River and Medina 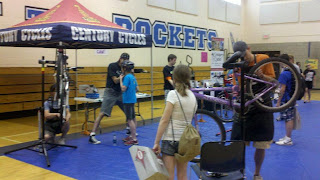 Get your bicycle ready to roll at a local bicycle fair, where everyone is invited to bring their bicycles for a free safety inspection, plus have the chance to win a bicycle helmet, get a free bike license, learn about the benefits of bicycling, and prepare for Bike to School Challenge and National Bike Month in May. It is free and open to the public. The fair dates, times and locations are:


The bicycle fairs also help families prepare for Century Cycles’ Bike to School Challenge (www.centurycycles.com/for/BTS) on May 6-24, 2013, which is the largest and most successful student bicycling program in the United States, inspiring more than 4,000 middle school and high school students in Bay Village, Rocky River, and Medina to ride their bikes to school as much as possible for three weeks each May -- to help the environment, improve their health, win prizes and have fun.


·        Century Cycles and Raleigh Bicycles are teaming up to give away 20 bicycle helmets to the first 20 families who attend (limit: one helmet per family).


·         Bike to School Challenge organizers will be available to answer questions about the program.


·        Other information booths include Bike Cleveland, University Hospitals, and other BTS sponsors.


For regular updates about Bay Bike to School Challenge, go to www.centurycycles.com/for/BTS, on Facebook at www.facebook.com/BikeToSchoolChallenge, and on Twitter at @BTSChallenge.
Posted by Century Cycles at 4:27 PM