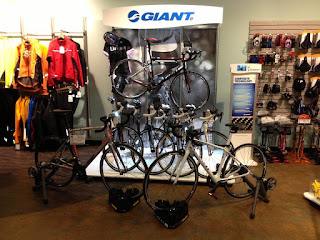 Century Cycles now has more fast road bikes than ever! We are thrilled to announce that Century Cycles is a Giant P.R.O. (Premium Race Offering) dealer, which means we now stock MORE of the best and fastest Giant road bikes for men and women!

These bikes will be in the spotlight at TONIGHT'S Spring Kick-Off Party, which for men will feature:

For women, the display features:

These bikes will be distributed throughout Century Cycles' three stores after the sale and can always be transferred to your closest Century Cycles store for test riding.

Another special section in Medina for the party will feature (and let you test ride!) the Shimano Di2 electronic shifting system. We think Di2 is a game-changer and think you will, too, after you ride it! We are hosting a special clinic for people to learn more about electronic shifting on Thursday, March 14, at 6:30pm at Century Cycles Medina. Mark your calendars and stay tuned for further details!
Posted by Century Cycles at 1:39 PM