The world-famous Ray's MTB Indoor Park opened to much fanfare in Cleveland, Ohio in the fall of 2004. Founder Ray Petro was just a avid mountain biker who was frustrated with not having trails to ride during Northeast Ohio's cold, wet, and snowy winters. So, working on the "if you build it, they will come" principle, he found an old parachute factory on Cleveland's West Side, and began building indoor trails and features that he would want to ride, creating the first indoor mountain bike park in the world.

Since that time, Ray's MTB has expanded to a second location in Milwaukee, Wisconsin, and inspired others to open similar parks in cities around the world, from Pittsburgh, Pennsylvania to Portland, Oregon, Canada, and Europe.

The park offers a large variety of terrain for every level of rider, from the beginner to the advance expert. All areas are clearly marked, so it's easy to find your way around without getting accidentally in over your head. Other areas include a pump track, and the Rhythm Room, which is dedicated to urban-style jumps and tricks, with a curved wall arount the outside, and several ramps with tabletops in the middle. The Cross-Country Loop is the longest continous trail; it runs around the perimeter of the building, and most closely duplicates the experience of riding a singletrack trail in the woods.

The staff of Century Cycles enjoys all kinds of on-road and off-road cycling, and Ray's MTB Indoor Park is no exception. All three of our stores have rabid fans of Ray's; here are some of their favorite ways to enjoy Ray's and their insiders' tips.

Chris Walters from the Medina store started riding at Ray's in the fall of 2011. He purchased a season pass this year, so he can stop by whenever the urge hits him. He'll often go after school or before work with Christopher Lenaghan (also from the Medina store and a Ray's season pass holder). He rides a Haro Steel Reserve 1.1 dirt jump bike, and spends most of his time in the Rhythm Room or in the Cross-Country Loop.

Chris's recommendation for first-time visitors to Ray's is to allow enough time to explore--the place is bigger than you think. Go on a weekday; get there when they open at noon, and you'll have the place practically to yourself. His other big tip is safety! Chris wears a standard BMX helmet, gloves, and a Brain-Pad, which is a mouth guard of the type used by mixed martial arts fighters. 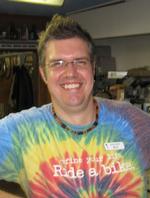 Rich Oettinger from the Peninsula store has been going to Ray's on a regular basis throughout the past several winters. He rides his 2010 Giant Reign 1 full-suspension mountain bike. He also likes getting a season pass, because it comes with free bike storage for the season, so all he has to do is show up and ride. Not to mention the fact that a season pass costs about the same as a membership to his local gym! He enjoys the riding the Sport section the most; it's got about a dozen different lines you can take, including a rock garden that's about 50 feet long, which makes it feel like riding a real rocky trail in the woods. Rich also likes going to the Rhythm Room just to watch the experts doing tricks there.

Rich suggests that if you're a first-timer to Ray's, start at the beginner sections and work your way up from there, even if you're already an intermediate to advanced rider. He also stresses safety--use the elbow and knee pads provided free of charge by Ray's! Rich also uses a full-face BMX helmet. 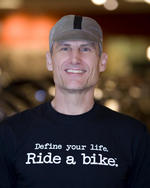 Last but certainly not least, Dan Ward, a bike mechanic from our Rocky River store, has been involved with Ray's from the very beginning. A close friend of Ray Petro, Dan has helped with marketing, graphic design, and trail design for the indoor park since its founding. Dan rides a couple of different older mountain bikes at Ray's.

Dan likes to ride the Rhythm Room and the Cross-Country Loop, but his favorite part of Ray's MTB Indoor Park is the fun, family-friendly atmosphere. You'll find kids aged 4 or 5 years old, up to folks in their 60s and 70s, and everyone is always quick to chat and offer tips and advice. He also enjoys the many special events planned at Ray's, such as demo rides with professional riders, and the annual Women's Weekend (going on RIGHT NOW!).

Dan has seen the terrain features at Ray's evolve from the early days up through the present. He is amazed at how much work is done every summer to redesign and improve the park. Several years ago, a deck was added at the beginning of the Sport section, which led to several options for intermediate-level trails. The staff at Ray's noticed how riders' habits evolved over time, specifically that people would stop on the deck, catch their breath, and watch other rides before they took their turn. The deck was so popular, that decks have been added to almost every other section since then.

The most significant change every year is that more and more beginner-friendly trails are added every year. So, give it a try, because it's not as intimidating as it looks. And, if you've been there before and thought it was too much for you to handle, try again, as there's bound to be new stuff that you'll be able to tackle with no problem!

Posted by Century Cycles at 9:00 AM

Email ThisBlogThis!Share to TwitterShare to FacebookShare to Pinterest
Labels: mountain biking, Ray's MTB, Where We Ride