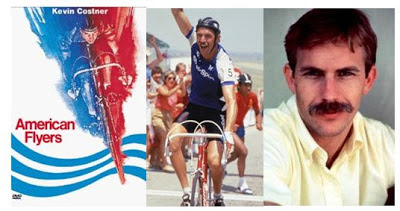 "American Flyers" -- which you can check out when you come kick off spring with us on March 1 -- hit theaters in 1985 and grossed just $1.4 million. It stars Kevin Costner before he became an award-winning superstar and is rather hard to find on DVD.

Yet it is #4 on Bicycling Magazine's Best Cycling Movies of All Time list because:


Pre–Bull Durham Kevin Costner in a mustache is one thing, but Rae-Dawn Chong’s wheel change is the real stunner in this fun story of two brothers who tackle the Hell of the West through the Rockies. Some of the details are ludicrous—the way the Russian pros bob and weave as they attack—but as celebration of the 1980s American cycling scene, with appearances by the 7-Eleven Team and the gone-but-missed Coors Classic, it’s worth your time.

Kevin Costner's mustache is "one thing," which is why it inspired our Gnarly Mustache Contest at the party (commence a'growin'!).

Besides the 7-Eleven team (which had Bob Roll -- a Century Cycles favorite! -- on its roster), the movie also has a brief appearance by the legendary Eddy Merckx. Keep an eye out for him starting stage 1.
Posted by Century Cycles at 4:53 PM