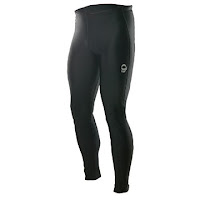 During my cold morning rides to work, I have really pushed my limits when it comes to temperatures. As the months rolled through October, November, and even into December, I routinely encountered mornings with temperatures in the low 30s and even down into the 20s. On those cold morning rides, I’d often find that ordinary fleece-lined tights just weren’t enough by themselves, and as temps fell below freezing I was having to double up on the leg coverage. While doubled up tights were able to keep me warm enough, they didn’t work well in the “freedom of movement” category. So I went into Century Cycles and asked for the warmest tights they had. Answer: Pearl Izumi AmFibTights.

The AmFib tights are an extra-thick, fleece-lined tight with wind-stopping panels covering all the frontal areas. Pearl Izumi’s website lists the AmFib tights as being good down to 21 degrees. My own experience says that is probably about right, as I actually rode in temperatures as cold as 23, and while there was no mistaking that it was a cold morning, I was still comfortable.

The AmFib tights come in a variety of configurations: with or without a chamois, and in drawstring waist or bibs. Mine are the drawstring waist without chamois, which works well for me because I generally like my tights over a pair of cycling shorts. They have zippers at the ankles, making them easy to get on or off, and they have some reflective accents on them for additional visibility. In terms of cut, they really work well on the bike, as the panels of material are shaped for full leg movement. The gripper elastic at the ankles works well, and they don’t ride up.

The only thing that I would like is if they were a little longer – or perhaps available in “regular” and “long” versions. I’m a pretty long-legged individual, and these come just to the tops of my ankles. In practice it isn’t a problem, since any time it’s cold enough to need the AmFib tights, I’m also wearing shoe booties that cover my ankles and then some. But I always appreciate tights that are a little longer (even if a bit longer than necessary), rather than “just enough.” It’s a minor thing – but if you have really long legs, then definitely try them on before you buy (a great reason to get them from CC rather than some online shop!)

I guess if I were to sum up the Pearl Izumi AmFib tights, I’d say that they are one pair of tights as warm as doubled-up tights without having to double up! 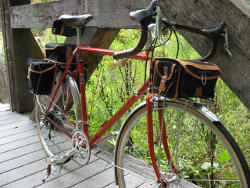 About the author: Kyle Brooks lives in Akron with his wife and two daughters, and works as a teacher in Medina. He has a collection of bikes, mostly vintage or classic styled steel road bikes, and even keeps a couple of bikes on display in his classroom. He maintained a bike-to-work average of 57% from August through December. His favorite bike shop is the Century Cycles store in Peninsula, though the new Medina store is super nice.
Posted by Century Cycles at 9:00 AM