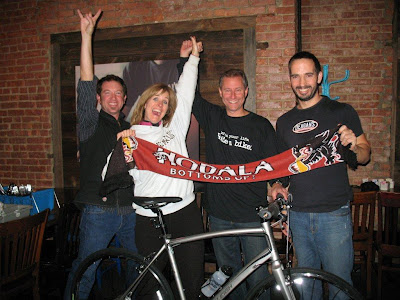 Hodala! Bottoms up and cheers to Donna Winfield of Rocky River, who won the Deagan's Bike Night grand prize, a Raleigh Cadent i8 bicycle from Century Cycles. She is pictured celebrating with (from left to right) Sean Burkey from Raleigh Bicycles, Scott Cowan from Century Cycles, and Dan Stroup from Deagan's Kitchen + Bar.

We had a rockin' time at the Deagan's Bike Night Finale party last Thursday, handing out lots of other prizes to Donna and all the other great folks who biked to at least one (but mostly more!) Deagan's Bike Nights this summer -- everything from socks and t-shirts to bike lights and gift cards, culminating in the grand prize bike giveaway.

Donna and her husband, Terry, had biked to at least six Bike Nights since June, and they got entry forms for the grand prize drawing each time they did. In fact, one of Donna's entries was chosen to win a Deagan's t-shirt right before another was chosen to win the bicycle. She had been out of town for work earlier in the day, but quickly rushed to Deagan's to make sure she didn't miss the drawing -- and it's a good thing!!

Our thanks to Deagan's for another great season of biking, eating and drinking. We're already looking forward to the THIRD annual Deagan's Bike Night in 2013!

Check out all the photos from the finale party in the slideshow below! (Click here if it is not appearing for you.)
Posted by Century Cycles at 2:44 PM