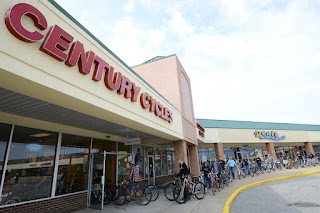 After yesterday's big move, Century Cycles stores in Rocky River and Peninsula re-opened this morning, and Medina will re-open tomorrow (Thursday, September 27) at its new location at 1059 North Court Street, on the Marc's side of the plaza, just four doors down from its previous location. Thanks so much for your patience as we moved and established a flagship store to better serve everyone!

Above is a photo of the bike parade that happens when you move hundreds of bicycles to their new home! For more photos of the move, check out the album on Facebook: http://on.fb.me/PZJbj2

And here is the press release announcing our new flagship store:


MEDINA, Ohio – Century Cycles (www.CenturyCycles.com) is marking its 20th anniversary with record sales, numerous awards and now a flagship store. Founded in Medina in 1992, Century Cycles is expanding and transforming its original store location into a flagship store for the three-store chain. The larger, more state-of-the-art Century Cycles is at 1059 North Court – on the Marc’s side of the plaza behind McDonalds on Route 42, a few doors down from their previous location at 1079 North Court.


“We are thrilled to be expanding our long tradition in Medina,” said Century Cycles owner Scott Cowan, who is also a resident of Medina County. “We are grateful for Medina’s support for the past 20 years, and we are excited to have a bigger, better, state-of-the-art bicycle store to continue serving Medina and Northeast Ohio’s bicycle needs for the next 20 years.”


In May, Century Cycles helped the Medina schools launch their first Bike To School Challenge, which encourages, educates and incentivizes middle school students to ride bicycles for their health and well-being. The program, which is also conducted in Bay Village and Rocky River schools, was cited among the reasons that Medina was honored recently as one of the 100 Best Communities for Young People.